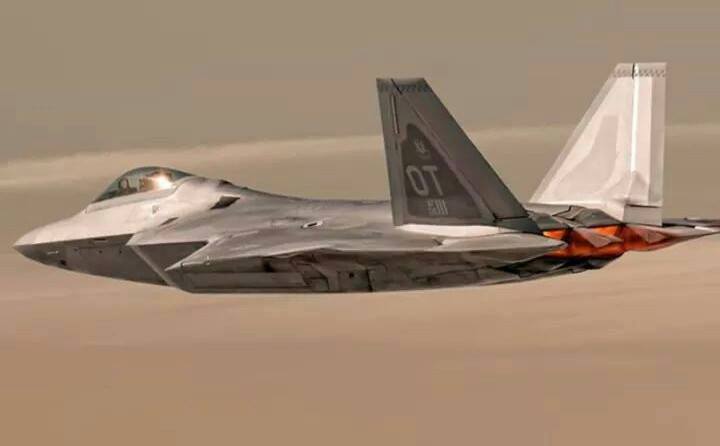 Fifth generation fighters are the most technologically advanced jets ever built. They were designed to operate with the help of digital programs and fly-by-wire to counter the threats they counter on the battlefield. Sophisticated avionics, stealth technology and super maneuvrability are just a few advantages over older jets that gives them domination in the sky. Being invisible to the enemies is a priority for the engineers, but it is also an extremely hard task for them. The stealth technology is a complex and advanced range of techniques which makes the aircraft (or any other vehicle) less visible to the opponent’s radars, and therefore reduces the chance of being detected. Appropriate design, smooth surfaces, electronic countermeasures and many others, are certain issues for the aircraft companies to deal with. Each fighter jet requires an appropriate mix of these techniques. Stealth design features enforces complex shape of the whole construction. Plain surfaces reduce the radar bounce-off and specially shaped exhaust nozzles reduce the IR radiation. Also the engines are located in body of the plane in order to hide as much of the heat-signature as possible. Special radars also have to be developed since the enemies can detect the aircraft’s own radar emissions. All these aspects have to be taken into account by engineers and this makes the designing extremely complex and expensive. That is the reason why only a few countries have decided to pursue the development of fifth generation fighter jets.

The United States Air Force undertook the Advance Tactical Fighter program in the mid 1980’s. Two air superiority fighters to replace F-15 Eagle and F-16 Fighting Falcon have since then been developed. In 2005 the first fifth generation fighter jet the Lockheed Martin F-22 Raptor was introduced by the USAF. It is an air superiority, supersonic, highly maneuverable stealth-featuring fighter equipped with state of the art weapons and electronics. It has supercruise at Mach 1.8, which means fly at Mach 1.8 without the use of afterburners.

The F-22 has never been sold to a foreign country. Even though it was expensive, the US let Lockheed Martin built another fifth generation fighter – The F-35 Lighning II. The aircraft is similar to the F-22 in terms of stealth and having top modern weapons, but it was built in three different variants because it was planned to be used by both the Marines, Air Force and Navy and therefore needed to have STOVL and Vertical Take off and Landing features. The equipment and performance can be changed depending on the mission, for example, if the objective does not require stealth technology the external pylons for weapons or fuel can be loaded (which increases the not only the weapons load but also the radar-visibility). This fighter got extremely expensive because to build a fifth generation aircraft capable of doing vertical takeoffs and landings proved itself to be extremely complex. The project has currently cost the US tax payers over 1 trillion dollars, and is by that the most expensive aircraft program ever.

The Sukhoi PAK FA “Perspektivny aviatsionny kompleks frontovoy aviatsii”, which means “Prospective Airborne Complex of Frontline Aviation” is a twin-engine, multirole fighter jet developed by Sukhoi. It is planned to be introduced by 2016. The aircraft is equipped – just like the Raptor – with  top modern weapons, stealth technology and has supercruise at mach 1.6. Since it has not yet been revealed there is very much speculations about it and there is a lot of propaganda involved. For instance Vladimir Putin claimed that: “This machine will be superior to our main competitor, the F-22, in terms of maneuverability, weaponry and range” which you can choose to interpret in any way you want. But it is by many considered to be the best fighter in the world when it enters service with the Russian air force. The main points that are considered by many to be better with the PAK FA than with the raptor is its IRST, its engines and its 3D Thrust vectoring system (the Raptor does not feature IRST and only has 2D TV). The engine that is currently being developed by Saturn and is said to be the “fifth generation fighter engine” will be delivered in the coming years and just like any other tremendously expensive project there has been a lot of speculations about it. India is also currently developing a fifth generation fighter projected to be introduced in 2022, namely the HAL FGFA, which is an upgraded version of the PAK FA. It is claimed that it is supposed to have 43 improvements compared to the PAK FA, among others stealth, supercruise, advanced sensors, networking and combat avionics.

A Chinese Chengdu J-20 on the ground

About the Chengdu J-20 we don’t know very much. Almost every piece of information is more speculation than fact. It is said that the Russians and Indians invited China to join their PAK FA program but the Chinese declined, claiming that they had a better idea. The “idea” that they were refferring to might be the J-20.

The project was started in the 90’s and it is expected to enter service some time between 2017 and 2019. The first flight was conducted in January 2011 and only showed the aircraft from outside. After reviewing photos, videos and some information from media we can figure out some vague information about the performance and the technology used in the new Chinese plane. Basically it is assumed that it is a fifth generation jet fighter with stealth technology, super maneuverability, sophisticated avionics and after photos released in 2013 showing one of the weapon bays, we know that it features missile launching rails. One year later a prototype was revealed which featured new stealth coating and intakes, plus a system that is believed to be an Electro-Optical Targeting System. Materials and the technology used are not well known, so it is hard to know really how advanced and stealthy it is. Recently we have seen the second Chinese stealth fighter aircraft, the Shenyang J-31, but to go into the specifications of this jet is rather pointless as it is still in an extremely early stage of development.

The fifth generation fighter is a sign of power.

The Japanese Mitsubishi ATD-X, the South Korean KF-X and the Indian-Russian FGFA Fifth generation fighter projects – Each and one of them is in a different stage of development and we really don’t know much about them. However, it clearly shows how important the air domination still is for the most powerful countries in the world and how much resources they spend on these projects. The coming years will be amazing as more and more details will be known about these secret developments.

The F-22 Raptor vs The Eurofighter Typhoon

F-35 – The biggest aviation project ever