Photos showing a new Chinese stealth fighter jet during test flights leaked. It seems the maiden flight of the new Shenyang J-31 took place October 31st. Richard Fisher, an expert about Asian military affairs at International Assessment and Strategy Center (IASC) told us on request he believes that this photos have not been published by accident – otherwise the internet censors would have stopped them immediately. The photos of the 5th generation Shenyang J-31 „Gyrfalcon“ are of good quality and the photographer had taken them from close nearby – Fisher is convinced this was all planned by Chinese leaders. It might play a role that Chinese leaders are under pressure at the moment as the family of the sixth and current Premier of the State Council of the People’s Republic of China, Wen Jiabao, had made a fortune of USD 2 billion or so during his period as Premier. Other Chinese officials in high positions also became incredibly rich. As reports about Chinese corruption have been published, Chinese internet censors are very busy blocking all these websites, among other the New York Times website was blocked over Wen Jiabao claims.

The „leak“ of these J-31 photos can help the leaders and high officials in different ways: First they might achieve a shift of the spotlight from corruption scandals to these more positive news for China (not so sure of these news are so positive for China’s neighbours). Second, the new 5th generation fighter allows the leader to show the mussels. Third, such news always help a nation to be proud and makes them stand together – nationalism was always a key to redirect the focus from internal problems – and Chinese leaders do not hesitate to play the nationalism card. This „nationalism game“ is a risky business. It helps leaders as nationalism makes the population stand together and behind their leaders. But when a tipping point is reached by overdo the game or by an external factor (like the dispute with Japan over the Senkaku/Diaoyu Island group in the East Chinese Sea) pressure by the steamed up population might backfire and force the leaders to take action they didn’t intend to take.

However the intention, the leak is „very controlled“ Fisher says: „China doesn’t reveal anything useful to a foreign military or intelligence service“. They don’t know anything about the ability of the new fighters and planned production and introduction. 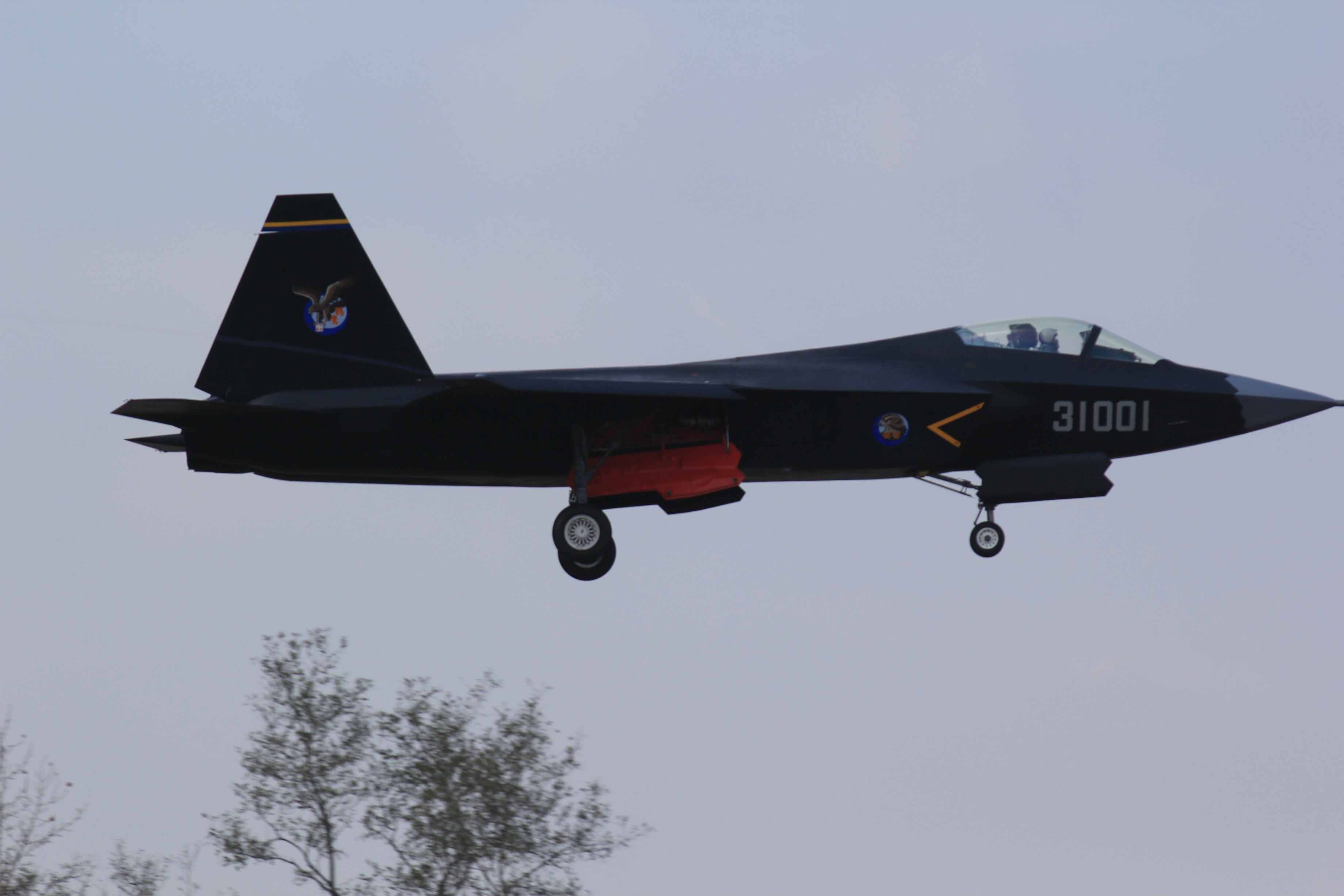 The new Shenyang J-31 probably has the name 鹘鹰 or Gyrfalcon (which means Falcon Eagle). It is already the second Chinese stealth fighter maiden flight within only two years – a development that surprised many in the West. The first 5th generation Stealth Fighter was the Chengdu J-20 歼–二零 which had the maiden flight in January 2011.

Experts like Fisher are  discordant about the introduction of the new Chinese stealth fighters. The J-20 is estimated to take place between 2017 and 2019. The introduction of the new medium-weight stealth fighter J-31 is around 2025-2027 according to some experts. However, Fisher is convinced the J-31 is much sooner than experts estimate: Fisher thinks the J-31 will be ready for the Chinese Air Force in 4-5 years already. This seems to be sporty, but you always have to base on the „worst case“ in the view of the Chinese counterparts, the Chinese neighbours and rivals, and the West.

The role of the stealthy Shenyang J-31

As outlined above, nothing is official in China. It could be the new design is complementary to the larger J-20, the J-20 would have the air superiority fighter/multirole combat aircraft role, the J-31 a smaller multirole fighter. But it could also be that the J-31 is a competitor to the J-20 and just one of them will really make it. The disadvantage of one aircraft would be less specialization and the higher concentration risk in case of problems with a design – the advantage is the increased efficiency of a one-fleet policy, a topic we covered in article about drones and the pressure on manned fighter jet.

It is rather likely that the smaller J-31 will be used on the Liaoning Aircraft Carrier. Maybe there are also different versions like the F-35 with three designs. The J-31 would probably come in two different designs, the Navy version for People’s Liberation Army Naval Air Force and the land-based J-31 version for the People’s Liberation Army Air Force.

Engines and Stealth characteristics are believed to be poor compared to the Western Stealth fighters. But again, it is better to be careful and respect these Chinese Stealth Fighters before a real estimate can be made based on facts or experience.