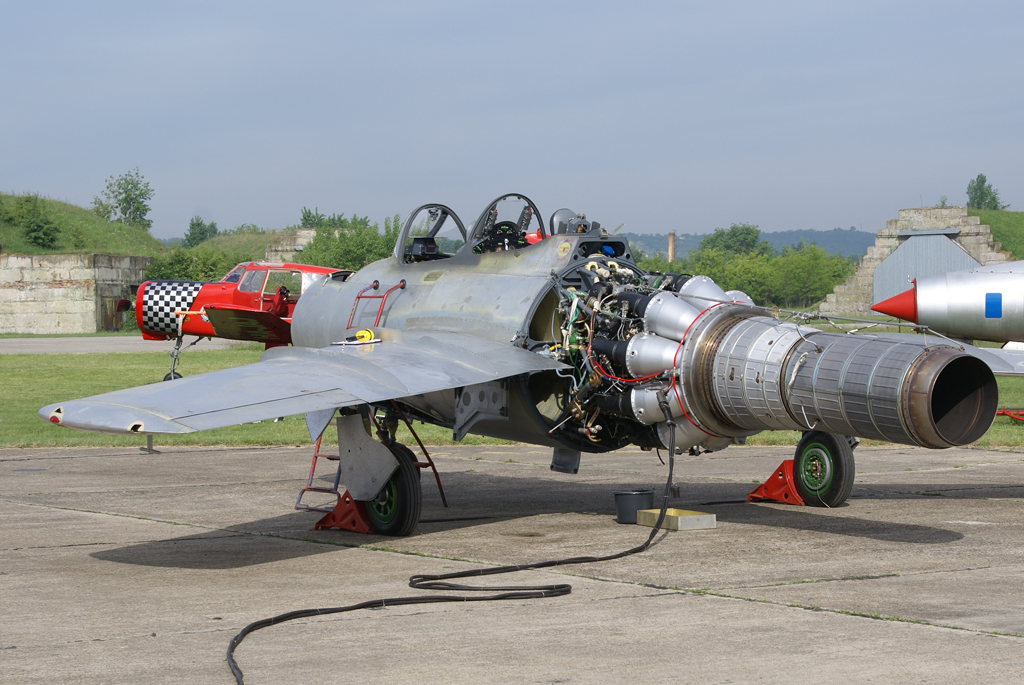 Its first flight was in December 30, 1947 with the original British engine, that then is manufactured as „Klimov RD-45“.  The first MiG-15 manufactured in series appears in December of 1948 and the first Regiments of MiG-15 are ready for 1949.  During September of the 1948, the aircraft did its first flight of the modified MiG-15bis, with a different motor, RD-45F, copy of the Rolls-Royce Nene-II, of 2,700 kg of pushing.  Its production began in the 1950s.

The MiG-15 banking to the right!

When the ongoing Korean War escalated with the North Korean offensive of 25 June 1950, the Northern Air Force was equipped with World War II-vintage Soviet prop-driven fighters, including 93 Il-10s and 79 Yak-9Ps. The North Korean Air Force had roughly 93 Il-10s, 79 Yak-9Ps, and 40–50 assorted transport/liaison/trainer aircraft“. The vast range of numerical and technical superiority of the USAF, led by advanced jets such as Lockheed F-80 Shooting Star and Republic F-84 Thunderjet fighters, quickly brought air superiority, thus laying North Korea’s cities bare to the destructive power of USAF B-29 bombers which, together with Navy and Marine aircraft, roamed the skies largely unopposed for a time.

The MiG-15 was the first ever Soviet fighter to be equipped with an ejection seat, pressurised cockpit, and swept wing.

The rear seat of the Mikoyan-Gurevich MiG-15 feels like a booby-trapped cage compared to the spacious Aero Vodochody L-39 Albatros (More info about the L39) with its bulbous canopy. Unlike the L-39 that I flew as an introduction to jet warbird training, the MiG-15 has hot ejection seats.

Even though the pin is still in my seat as I strap in, I’m careful to manoeuvre the belts away from the ejection handle, conscious that I’m sitting above a canister filled with gunpowder (the 1940s-1950s era technology for an ejection seat 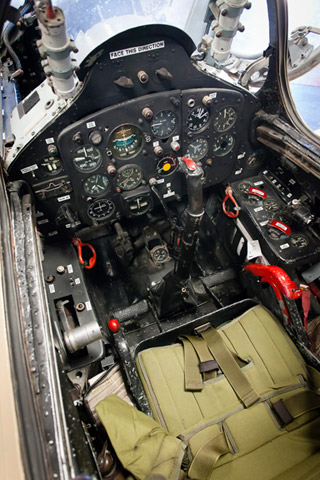 Seated in the rear cockpit, one of the few placards that I can easily read is an aftermarket sticker straight ahead that says “Face this direction.” Other placards and markings are in Cyrillic. That would be why he encourages me to “stay visual” in the aircraft. To a U.S. pilot, some of the instrumentation can create confusion: The Soviet-era attitude indicator is the opposite—brown on top and blue on the bottom. That could spell disaster for an unfamiliar pilot trying to recover from an unusual attitude in instrument meteorological conditions.

The turbojet “burns as much fuel on the ground as it does in cruise,” an expert says, explaining that this aircraft, which holds 450 gallons with the drop tanks, burns about 5 gallons per minute. That gives the pilot in command 1.5 hours of fuel on board, or about a 45-minute flight counting start-up, taxi, and required landing reserves. “My watch starts when the engine starts,” he says, “and you fly the MiG with your watch.” Winds are another limiting factor, Salganek says. Because the ailerons are ineffective at slow airspeeds, the MiG doesn’t have enough aileron effectiveness to land in strong crosswinds. The MiG can cover easily 350 nautical miles in one hour, but cross-country planning is very difficult  and challenging because of the runway lengths and services it requires. Jet fuel and nitrogen must be available at each point of landing. (The wheels’ drum brakes operate off nitrogen that must be replenished before every flight.) The MiG-15 needs at least 5,000 feet of runway at sea level, and 8,000 feet at 6,000-feet elevations like in Santa Fe. If a pilot experiences a problem shortly after takeoff, a safe landing could be precluded. “The brakes are OK for 1947, but they aren’t made to come back and land with full fuel,” he continues.

The aircraft is less responsive and difficult to handle at low airspeeds, A pilot would learn during a slow flight maneuver. After he makes gentle turns at 140 knots, the pilot takes the controls for a moment, deflecting the stick full left and full right. The MiG just wallows, barely rolling a few degrees. If you’d try it yourself, expecting that you’re not an experienced MiG15 pilot, you’d end up with the same results. Even with two stall fences on each wing, the ailerons are ineffective at slow airspeeds (A third row was added to the MiG-17, which considerably helped the low-speed handling characteristics, Salganek says.). It’s an eye opener of what to expect on final approach to landing 10 knots slower at 130 knots. (That’s why it can’t handle more than a 20-knot crosswind.)

The turbojet is slow to accelerate; on takeoff the average pilot use 1,500 feet of runway before rotation versus 1,000 feet in the L-39 Albatros. Once the engine starts accelerating, however, it leaves the L-39 in the dust. As we approach 120 knots to 125 knots, the pilot should prepare to rotate. Pilots have a tendency to over-rotate the MiG-15, which can put the aircraft in a dangerous attitude—an angle of attack so high the jet can’t climb or accelerate, causing it to crash off the end of the runway.