The fastest Plane in the World – SR-71 Blackbird 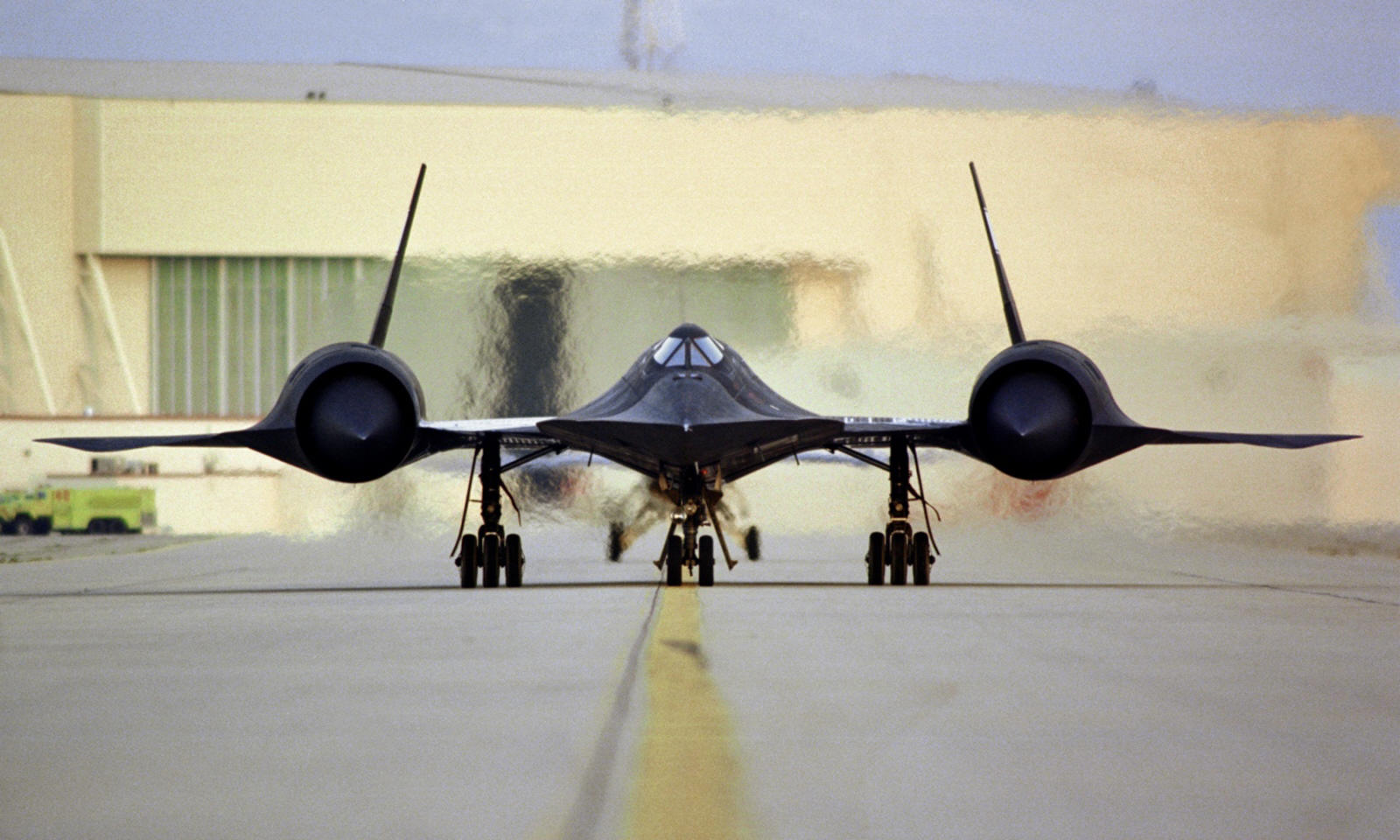 To start with – there is a nice video of (former) Top Gear’s Jeremy Clarkson explaining the fastest plane in the world – Lockheed SR-71 Blackbird. 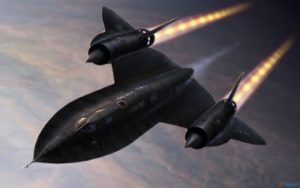 The plane that we are going to assess is the American Lockheed SR-71 Blackbird, built by the famous Lockheed Skunk Works division. Now let’s not bark around the tree, what is this aircraft really about? It is as of today the world’s fastest manned air-breathing jet ever flown with an official top speed of Mach 3.3, although some claim that it is higher and since some parts of the Blackbird project are still classified – so we can’t know for sure. 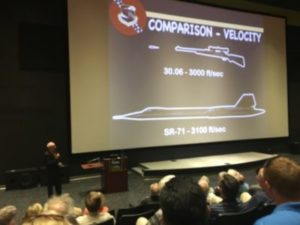 Because of the astonishingly high speed, the aircraft was travelling at, the canopy was heated up to over 300°C. This meant that its design had to be completely rethought about. The high temperatures are a result of a physical phenomenon that is causing the air molecules at high speeds to be smashed into each other which results in higher pressure which leads to higher temperatures. In easy words: The air molecules can’t get out of the way fast enough so they pile up in front of the jet and give off heat. This meant that the airplane had to be built so that it could both withstand high temperatures, high stress, and be stealthy. Because yes, the Blackbird was using stealth technology. It was actually the first operational aircraft using stealth features. Of course, it did not have a low radar cross section as modern fighters have, the SR-71 had an RCS of about 10m^2 while for instance the F-22 Raptor looks like a marble on the radar. The solution to these three problems was a worked alloy of titanium covered with a corrugated skin, crafted into a stealthy shape. The titanium was used because of its extreme durability, while the corrugated skin was used to deal with the above-presented heat problem because the normal paint would just be curled and split by the high temperatures. Stealth was a brand new idea, and the use of 85% of titanium in the structure was also an almost unexplored area of engineering. When welding the titanium normal tap water could not be used as it was corrosive to the titanium, the same went with the “usually” used cadmium plated tools that

also lead to corrosion, which leads to a lot of new tools having to be bought. There were also problems with metallurgical contamination which led to that at a point of the Blackbird production, over 80% of the titanium that was delivered had to be thrown away. Interesting note here: The primary alloy for the SR-71, titanium, was so scarce outside the USSR that the CIA had to import some covertly from the Soviet Union.
Many of you might think that this beautiful bird was at the limit of destruction as it exceeded Mach 3. But at this point, it actually performs best. As a matter of fact, it was built to fly at this speed. At very high speeds of Mach 3+, the SR-71 flight body heats up so much that the metal expands a lot. If the metal pieces of the airplane at this point would have been tightly screwed together, the aircraft would simply expand to its own death, making the expansion push the metal pieces into each other with very serious consequences. This is why the Lockheed Skunk Works division built the Blackbird with big gaps at some points in the structure, resulting in the body dripping fuel, as is explained by the quote below:

“Ironically, the plane was dripping, […] Fuel was seeping through the joints, raining down on the hangar floor. At Mach 3, the plane would expand several inches because of the severe temperature, which could heat the leading edge of the wing to 1,100 degrees. To prevent cracking, expansion joints had been built into the plane. Sealant resembling rubber glue covered the seams, but when the plane was subsonic, fuel would leak through the joints.” – Major Brian Shul, Author of “Sled Driver”.

The engines that got the SR-71 to Mach 3 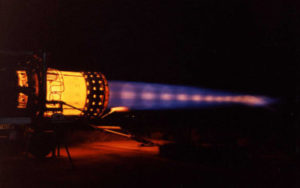 But what does the SR-71 actually own its speed to? Its engines. The two black “pods” on each side of the flight body are as complex and thought through as the rest of the aircraft. They consist of two Pratt & Whitney J58 engines which were at the time the only American engines built to continuously use afterburners
(which is why the SR-71 consumed so much fuel). Just like previously mentioned with the flight body being built for extreme speeds – so were the engines with their ultimate cruising speed at Mach 3.2. When going supersonic, the air going into the engine is travelling at supersonic speeds, resulting in shockwaves inside of the engine which might lead to engine failure. To get rid of this problem, the inlets to the engines on the SR-71 are “blocked” by a big pointy piece of metal, called a spike, which moves forward and backwards depending on how fast the aircraft is flying. When flying at top speed, the spikes could retract as much as 66 centimetres into the engine, changing the speed of the incoming air to a subsonic 0.5 Mach. It does this to keep the air pressure inside of the engine constant. The same idea is used on among others by the Soviet Sukhoi Su-22 Fitter. However, sometimes when going supersonic, the engines failed in changing the pressure of the incoming air which led to only one of the engines going supersonic. The result of this is heavy jawing which can only be solved by restarting the engine, however often both of the engines were restarted to be sure that the yawing stopped. The energy of the shockwaves at the spike, plus the heat produced by the constantly used afterburners, heated up the compressors to temperatures of over 400°C. Actually, the maximum temperature the engine compressors could work at (427° Celsius) was what limited the speed of the Blackbird. However, studies made in the later years of the 20’th century showed that with the right materials, engine inlets of the SR-71 type could theoreticaly work at speeds as high as mach 6.

The speed was its main defence

But even though the Blackbird was so expensive and hard to build, it did get onto the production line, and it was an enormous success. Not only was it black, had been a secret project and looking like it was from another planet, it was the fastest aircraft the world has ever seen. And more importantly for the US – it was faster than anything the Soviets had ever built. Although it carried electronic countermeasures, the main defensive system of it versus missiles was simply to outrun them, just like quoted from the SR-71 Blackbird documentary on PBS:

“If a surface-to-air missile launch was detected, the standard evasive action was simply to accelerate and outfly the missile”.

The effectiveness of this defence was proved in 1981 when Kelly Johnson, one of the designers of the Blackbird, announced that over 1,000 missiles had been launched towards the SR-71, but none of them had hit. Out of the 32 SR-71s that were built, 12 were lost due to accidents, never because of enemy fire. While talking about weapons and countermeasures, it is needed to say that the SR-71 was never fitted with any weapons. Of course, this was due to many reasons but one was that it was simply not built to shoot. It was built to surveil and take pictures and since it could not (in practical) be shot down it had no need to be fitted with weapons. The Blackbird was only capable to fly for approximately 5,400km which may seem like a lot, but compared to the Lockheed U-2, another reconnassaince aircraft, with a range of over 10,000km, it is (very) inferior. The short range, which was a result of the very thirsty engines, was the reason for the in-air-refueling capability to be fitted with the SR-71.

To the edge of space in a titanium bird 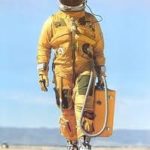 Spacesuit used by the crew of the SR-71.

It flew so high and so fast that the crew needed pressurized space suits when flying it. And it is said that at the maximum altitude of it it was possible to see the curvature of the earth, which refers to this quote by Colonel Alison: “On a clear day you can see forever…”. The service ceiling of 85,000 feet (25,900m) meant that it was an excellent experimental unit for space travels. That, combined with the great speeds of it was two of the reasons why NASA decided to take over the last two Blackbirds after its retirement from the Air Force in 1998. This means that the world’s fastest aircraft was in service from 1966 until NASA retired its two units in 1999, and most of the remaining Blackbirds are today stationed at museums or military bases across the US.

Since the dawn of these airplanes there have been countless missiles and other rocket-propelled aerial vehicles moving faster than Mach 3.3 but there has never been a manned, air-breathing one. We do not know if there will be one in the future – and given the recent developments with UAVs it looks unlikely – but we do know that when the Blackbird entered service with the US Air Force, it was cooler, faster and more astonishing than the world had ever seen before. Gathering information about the enemy while flying at an altitude of 20,000 meters at speeds as high as three times the speed of sound is a true proof of the skill of American Skunk Works engineers. Just being able to accelerate away from a surface-to-air missile and use that feature as a main defence is a huge accomplishment on its own. The Lockheed SR-71 Blackbird will therefore reserve a special place in most aviation lover’s heart.