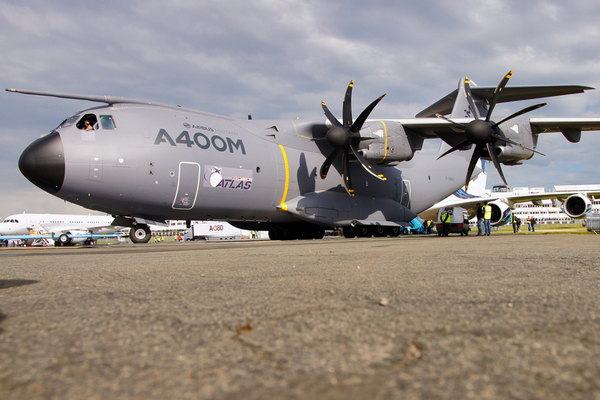 The brand new A400M has been designed cautiously to meet the contemporary equipment transport needs of modern armed forces around the world. The A400M is capable of undertaking missions which previously required two, or more, different types of aircraft, and which even then provided a somewhat imperfect solution. Its fuselage external width of 5.64 meters (18ft 6in) is equal to that of the A330/A340 family wide-body. Its cargo hold has an interior usable width of four meters (13ft), height of up to four meters (13ft), and usable length of 17.71 meters (58ft).

With a maximum payload of up to 37tons (81,600lb) and a volume of 340m3 (12,000 ft3), the A400M can carry various pieces of outsized cargo including, vehicles and helicopters that are too large or too heavy for previous generation tactical airlifters, for example, an NH90 or a CH-47 Chinook helicopter, or two heavily armored vehicles for military purposes. It can also carry a heavy truck, or even a rescue boat, or large lifting devices, such as excavators or mobile cranes needed to assist in disaster relief which have happened numerous times before.

The A400M can carry around 116 paratroopers, or simply personnel, which is more than an A318. They can be seated in four rows, all along the two sides of the fuselage, and back along the center line, thanks to the aircraft’s width.

The A400M, a collaborative venture involving governments and even Industries of around six European Countries, will support the deployment of the Joint Rapid Reaction Force and will give the Royal Air Force (RAF) a strategic and tactical aircraft which is capable of supporting all three services and be capable of interoperability with other Forces.

No let’s talk about the A-400M performance.

High Speed/Altitude abilities of the A400M

Due to the aircraft’s new state of the art technology, including its unique for engine set up of Europrop International TP400 turboprop, which will be the most powerful turboprops developed to date in the western world, they will be lighter, easy to maintain and will consume 20% less fuel per mission. Thanks to this, the aircraft holds the capability of flying long distance (up to 4,700nm or (8,700km). At a cruising altitude of up to 37,000ft, and a speed of Mach 0.72, this is very similar to the performance of a turbofan powered airlifter. It can even fly up to an altitude of 40,000ft in special operational situations.

A new, state of the art Defensive Aids Suite will be fitted into the aircraft, incorporating radio and infrared frequency detectors, electronic-countermeasure equipment and flare\chaff dispensers. The cargo bay of the Atlas will be controlled by a single air loadmaster and can be configured for numerous roles including:

The A400M features two Head-up-Displays (HUDs) which provide the pilots with all the necessary primary flight information together with Flight Director (FD) orders and flight guidance help during critical mission phases, such as tactical landings at unequipped airfields, in-flight refueling or low-level flying. The Atlas’ cockpit also features eight large interchangeable liquid crystal head-down displays. Six of these, three per pilot, feature primary flight displays (PFDs), navigation displays, management or video, while two of them are for the general systems monitoring. These modern Flight Management System (FMS) screens are programmed using alpha-numerical keyboards for simple entering of data needed. The optional Enhanced Vision System (EVS) based on Forward Looking Infra-Red (FLIR) technology generates a high tech sensor based image of the environment in front of the aircraft in low visibility conditions. The EVS image is displayed on the HUD to provide the pilots at the flight deck with additional visual cues, which at times, are HIGHLY crucial.

The cockpit of the Atlas.

Another key feature of the A400M is its computerized “fly-by-wire” flight controls already widely being used on other state of the art civil transport aircraft. Replacing the conventional cables and pulleys by electrical wires linked to the four independent flight control computers which send signals to actuators, not only reduces weight significantly, but also maintenance time, which is crucial when the number of missions taking place are on the high side. This also gives a greater precision to the aircraft’s commands. Furthermore, when in normal flight law, fly-by-wire controls permit the implementation of “flight envelope protection” which, by preventing the aircraft from stalling and ending up in a critical situation, allows the pilot to achieve the aircraft’s optimum performance in a critical escape maneuver by simply pulling the stick back. The fly-by-wire system then manages the whole aircraft configuration. The fly-by-wire flight envelope protection is a great contributor to the survivability of the aircraft in a hostile situation, enabling the aircraft to achieve extreme escape maneuvers, saving money and lives. Thanks to fly-by-wire, the cumbersome central control column can be replaced by light and easy to handle side-stick-controllers, providing the pilots with a free view to the large TV-like screens in front of them, while also allowing for a foldable table to be pulled out as needed.

The A400M has been thoroughly designed to be the most reliable airlifter ever. By using proven Airbus commercial design concept, its availability benefits from high component reliability. Its new maintenance concept, which is largely inspired from commercial civil airliner experience, will translate into a very high dispatch reliability of 98.7 per cent at entry into service. This will greatly reduce the current life cycle costs. Over a total of 12 years operation, the mandatory down time will require the A400M to be on the ground for just 84 days.

Thanks to its carefully designed performance and capabilities, a fleet of eight A400Ms offers the same productivity (measured in tons per nm each year) as a fleet of eighteen previous tactical airlifters. The Life Cycle Cost of these eighteen previous generation tactical airlifters is more than 50% higher than the one of the eight new A400M fleet and they are unable to transport outsize loads such as helicopters or armored vehicles including MRAP (Mine Resistant Ambush Protected) vehicles, which can be transported by the A400M.

Although the A400M sounds like a great aircraft. It surely has many issues. A few months ago Airbus specifically highlighted a negative cost and a high risk of evolution for its delayed A400M.

Airbus Chief Tom Enders has said “We have not performed as we would have wished and I must apologise. Let me assure you that there will be management and organisational consequences. We will learn our lessons.”

Several countries are furious over these delays.

Ms Von Der Leyen has been taking a tough line with Airbus as an attempt to push through an extensive overhaul of Germany’s defence procurement budget to improve the state of equipment already in service. Ms Von Der Leyen admitted that while Germany could implement most of its foreign missions, it could not fulfil its Nato defence commitments.