Maria – The girl with an aircraft restoration hobby 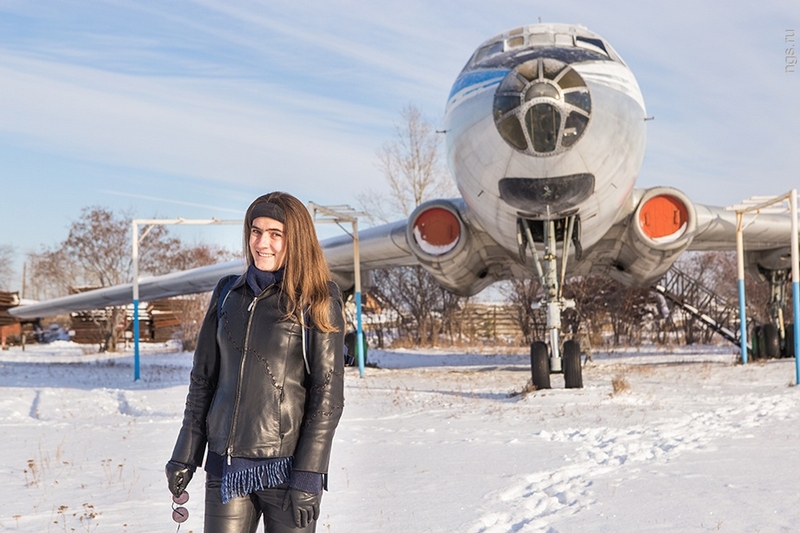 Maria, who is a mathematician from Novosibirsk „scientists city“ as it was called in Soviet times, has a rather unusual hobby. Can you guess what is she up to just by looking at the photo above? Probably the first thought that comes to mind is that her hobby is flying planes or plane spotting. Well, not really. Her hobby doesn’t consist of flying around, she actually has a large passenger jet to restore piece by piece, slowly.

Maria, who almost finished her doctorate program in a local university, has got a real, once operational Soviet TU-104 plane to restore. The plane is parked at the very far end of the airfield and it’s pretty far away from her day job and place of residence, however she visits her plane almost every day to work on it, just like a dedicated person would!

Maria has met and greeted the photographers near her plane, trying to calm the watch dogs of various types living near her plane. „I am coming here a few days a week. It takes one hour and a half to get here. First on a bus, then in a taxi“, says Maria. „It’s very hard to get here in winter, when the snow is high. I get shoes full of snow whilst getting to the plane. It’s very cold in the plane in the winter.“.

And when the photographers got into the plane, it really was much colder inside than outside.

Five years ago she learned that there was a written-off – out of service, grounded plane here in Berdsk. „I came here and asked to take a look at what’s inside“, says Masha. „It was a very sad sight – all of the gauges and devices were ripped off, the wiring was stolen by the scrap metal hunters.“

„So I offered to them that I would restore the plane.“ At first they were skeptical, however as Maria started bringing in the rare pieces of equipment for the cockpit they became more assured of her seriousness.

As you can see, a lot of gauges are already in position!

„For now I restore only the cabin, the cockpit, the dashboard“, says Maria, „I find the parts via the internet, online, some for money, some people give them to me as gifts“. She didn’t mention the prices of those things, so as not to attract a new bunch of burglars and scrappers.

She still hopes that someday this plane can fly. „However, as for now, the ready to fly state of this plane is zero percent ready, almost nothing is in here – no engines, nothing“ says the girl. „We have finished 60% of the cockpit and cabin, but it is really not enough for the plane to fly“.

„It’s more likely that we’ll make a museum piece of the plane. Even now whole families come to me and ask to sit inside, take photos, etc.“

She started alone, but recently her boyfriend started to help her from time to time, and then two senior ex-pilots joined her effort in restoration jobs.

„This plane has stayed here for 36 years already!“, says the girl, „At first they used it for some training for paratroopers, then it was used just as a storage facility, and later it was just abandoned.“

Maria has yet to learn how to fly a plane, for now she is finishing her doctorate and after that she plans to take flying classes.

As for this plane, it is a TU-104 – the first Soviet passenger jet. It was used from 1956 to 1979 and around 201 planes were built. The crew is 7 people, and it can carry 50 to 100 passengers. According to studies, almost 18% of these planes got into an emergency or crashed, which makes it the worst among all Soviet planes.

A big thanks to Maria for restoring the aircraft and to the photographers!