Switzerland is a weird country.
A few examples? In the case of nuclear war, the Swiss have bunkers capable of fitting more than 100% of the country’s population – it is the only (paranoid enough) country to be capable of doing that.
Swiss highways can be converted into runways by quickly removing the grade separations in between the lanes. Switzerland also has ad-hoc airbases with hangars carved out of the mountains.
And the Swiss Air Force has office hours – yes, office hours. So despite all the „heavy armour“ around – just invade at night time and Swiss Air Force pilots are in bed. And due to the noise level which could hurt important Alpine tourist region – Swiss pilots have to go abroad to fly supersonic (and are not flying at all in the mountains during tourist season).

I was driving through Switzerland years ago, when I discovered a fighter jet taxiing out of a mountainside and finally take off on a nearby landing strip.

Switzerland is neutral, but has one of the largest armies on a per capita basis and all militia soldiers take their guns home – one could say Switzerland has an almost national paranoia about defence. Where does this come from? Historically, it stems from the fact that Switzerland is at the crossroads of important routes through the Alps – critical for any emperor. During the Cold War, the Swiss built a giant militia-based national defence system that rivals that of any country in the world. If anyone were to invade Switzerland, they would find a nation armed to the teeth. Switzerland has a national building code that requires every home to either have a bunker or pay into a fund to maintain community bunkers – so every Swiss Citizen has quick access to a shelter. 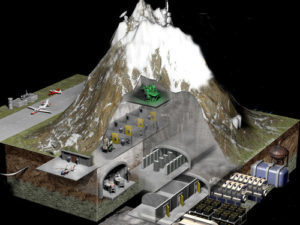 The Swiss Army maintains a defence network of huge fortified cannon placements – some of them well able to attack an approaching enemy well beyond the Swiss border. Switzerland has countless mountain bunkers – Swiss mountains are like cheese, countless holes are drilled inside – one of them being a big bunker with a small train, for the Swiss government. Cannon placements are extremely well hidden, and you can imagine it would be a nasty surprise for an invader to be in the firing range of one of those cannons. 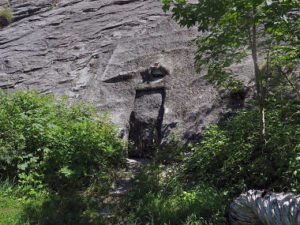 Are you sure I’m a rock?

The Swiss army also had countless fake rocks, houses or barns that could open a whole wall or split into two, with cannons and/or nasty machine guns inside. Many of those were given up recently, and even Swiss citizens were surprised how well guarded they were. Also, thousands of Swiss tunnels and bridges, but also highways and railroads are built with tank traps and demolition charges.

A regular visitor to Switzerland wrote:

When we used to visit Switzerland we had a game as we drove along or walked the mountain paths – „Spot the hidden bunker„. The more you looked, the more you saw. Switzerland is riddled with hidden and disguised military installations. What appeared to be a rock face in a lay-by beside the road were actually steel and concrete doors painted like rock. That 4 lane highway actually converts to a runway with the hangar doors hidden in the cliffs beside it. The cute looking little chocolate box mountain chalet you are hiking towards has machine gun slits on closer inspection.

The Swiss maintain a small air force. That wasn’t always like that, it once had a huge Vampire and Venom fleet, with only the married pilots having ejection seats. Nowadays, Switzerland has 32 Boeing F/A-18 Hornets (initially 34) and 54 F-5E Tiger (to be replaced by 2016 – but Switzerland voted against the purchase of Saab JAS-39 Gripen in a popular vote in 2014). By the way – even the Swiss Air Force pilots where militiamen except the F/A-18 pilots who are professionals – Most of the militia pilots are Civilian pilots outside the Swiss Air Force, but some of them farmers or butchers. While small, the Swiss Air Force is also very secretive. Alongside their (countless) mountain air bases are hardened tunnels drilled into the mountains – where the fighter jets are being kept. If enemy pilots would be flying overhead, all they would see is taxiways disappearing into the mountains. And there is the rumour that even runways are vanishing in the mountains – with only a small part being visible. 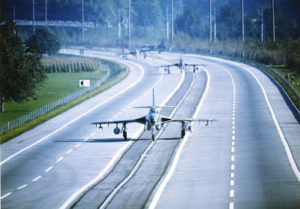 Hawker Hunter on Highway in Switzerland

The Swiss Air Force also has highways parts that can be converted into landing/takeoff runways by quickly removing the grade separations – and from time to time exercises do take place on those parts. Usually, at night time, highways are closed down so the fighter jets could land.

How the hell do they find their way?

Another remarkable thing is how Swiss military pilots managed to fly within the Swiss Alps – without ILS and GPS, of course. And they didn’t just fly at good weather!

During recent tourist Hawker Hunter flights – organized by MiGFlug – the pilot explained the system to an astonished British customer. The customer asked how they managed to not lose orientation in the mountains, as everything looks similar and they are flying at low level through valleys – so it’s hard to have orientation points. The pilot – which was the famous Jetman Yves Rossy, a former military and still active Hunter pilot – explained:

First of all, as a Swiss pilot, you know the geography extremely well. But when the weather was bad, we were guided from ground stations who told us exactly where to fly, how many degrees to the left, when to go up, when to go down. It was an extreme level of trust as we sometimes didn’t see anything while flying through a narrow valley at low level. A simple system, but it worked.

The customer then asked: Well it works for Switzerland, but how do Swiss pilots manage the orientation abroad?
Yves „Jetman“ Rossy:

We do not invade, so why do pilots have to manage navigation abroad?