Watching films like Top Gun or Operation: Red Flag the appeal of being a fighter jet pilot, is easily seen, but would the famous actor Tom Cruise have made a real fighter pilot, let alone you or me? The cockpit of a fighter plane is a very restricted and highly hostile environment.

Due to the high altitudes at which they may fly there is little naturally available oxygen and the outside temperature is very low. It’s about 40 to 60 degrees below zero celsius. The movement of the plane can result in severe motion sickness, and the forces produced on to the body by one of the most advanced aerobatic aircraft in the world is very dangerous and literally crushing.

G-force is an instant killer. In fact, the effects of g-force was, as long ago as the Second World War, causing the death of pilots who either lost consciousness or were unable to quickly bail out of their planes. 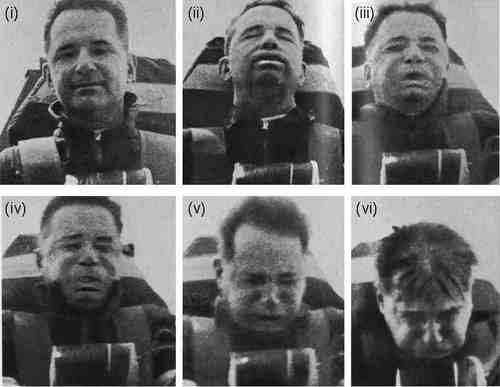 The ‚g‘ in g-force refers to the word ‚gravity‘, the force currently allowing you to simply sit down and read this article, and while the force has little to do with gravity, it provides an easily  understandable measurement of what g-force really is – essentially acceleration. Most people think of acceleration as an increase in speed.

This is how the word is generally used when thinking about cars and motorbikes, but in purely scientific terms acceleration is a change in velocity (change in speed and/or direction). It’s weird to think that a car that is slowing down or braking or turning a corner is really and truly accelerating if the word was used in its scientific sense.

Grey-out — Loss of peripheral vision (also referred to as tunnel vision) with loss of colour perception, and no loss of consciousness, The pilot can still hear, feel, and think. Recovery time two to three seconds after release of positive G force.

L.O.C. — Loss of consciousness. The subject cannot hear, feel, think, or function. Frequently accompanied by seizure activity and/or loss of bladder and bowel control. Recovery does not occur on the average for 15 to 20 seconds after the G force is terminated. The time required to return to consciousness may vary from nine to 20 seconds, and the subject does not re- turn to normal function for several minutes. Very dangerous.

+ G — Positive G forces exerted through the vertical axis of the body. The effect of positive G loading (± G is a function of the G load, the time exposed to the G load, and the rate at which the G load is produced.