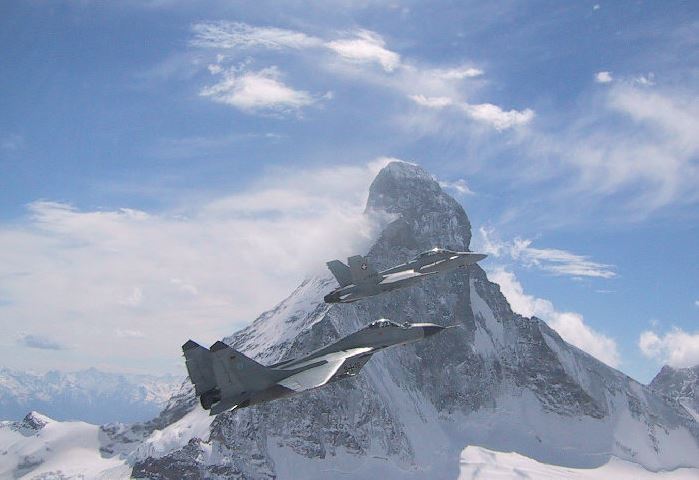 As we all know Soviet and Russian built aircraft differ a lot from the concept. The same is true for aircraft coming from other (former) Warzaw Pact countries, like the Czech Aero Vodochody. They tend do be simpler and more robust, and built mainly for dogfight. And they would use the same technology and parts in different models. Whereas Western aircraft are often more delicate and precise – and made for precision strikes and attacks from beyond visual range.

But also, the Sovjets often came up with creative solutions – like the periscope in the MiG-29 UB version or the helmet mounted display (HMD).

MiG-29 periscope – view of the runway during landing

Below we present two interesting videos with comparisons of Western and Eastern military aircraft.

From the video description:

Who is better – the American built McDonnell Douglas F/A-18 Hornet or the Soviet counterpart, the Mikoyan MiG-29 Fulcrum?
US F/A-18s took the chance to do a joint training with the German MiG-29s after the German reunification. The German Luftwaffe inherited the MiG-29s from the Air Forces of the National People’s Army (East German Air Forces). So they became the first NATO MiG-29s, and allowed the NATO members to study the top weapon of the former Warsaw Pact countries. A lot of rumors have been spread about the capabilities of this top fighter jet – now they had the possibility to check and verify them.
In aerial combat, the Luftwaffe MiG-29s proved to be very dangerous, especially in close in maneuvering engagements. With the helmet mounted display (HMD) along with the Vympel R-73 (NATO reporting name AA-11 Archer) off-boresight short-range air-to-air missile, the MiG-29 Fulcrums had a clear advantage in dogfights over the Western counterpart, the US Air Force F/A-18 Hornet.

Interesting fact: The inventor and one of the pioneers in helmet mounted display technology was South Africa. In Angola, the South African system proved to be very efficient in combat by downing Soviet aircraft. The USSR then introduced a crash program to copy and improve the helmet mounted display (HMD) technology. This resulted in the MiG-29 with HMD in 1985, which cam along with a high off-boresight weapon (R-73). This dangerous combination gave the Soviets an advantage in dogfights.

Once its effectiveness was known through the access to the Soviet technology after the reunification and the access to the former East German MiG-29s, several nations responded with programs to counter the MiG-29-HMD-R-73 combination.

A similar training also took place in Switzerland – where Swiss Air Force F/A-18s flew against the German Luftwaffe MiG-29s. Swiss Pilots where similarly surprised about the MiG-29s qualities in a close dogfight: helmet mounted display and a superior maneuverability.

A user wrote us:
“I have seen the official German report.The German fighter pilots took out the f18 in full out engagement without any problems. Then they where restricted so the Americans could do some 1v1 training sorties. As you might know the mig29 have absolutely no equal in close range and dogfight scenario agents US. That’s because the Russians have very wide line of sight on they’re close range it missiles. It can be fired while turning at 90 degree of set. Mig pilots have the advantage in helmet mounted sight that can lock targets and fire with just looking at it.Watch the full video if you can find it and you will see one German pilot shooting down 3 f18 in few seconds.The mig also out turns out ecselaretes and out climbs the f18.This combined with the best short range or missals in the world makes it the best jet for the time it was build and still can deal with pretty much any Western fighter.Don’t forget that the Germans are using old versions of the mig29.The modern mig 29 have as good long range radar and missales as the Western top jets.”