The infographic below shows the most famous development of the legendary Mikoyan-Gurevich Design bureau (today Russian Aircraft Corporation MiG or RSK MiG). The former Sovjet design bureau was named after its founders, Artem Mikoyan and Mikhail Gurevich. [CSSBUTTON target=“http://www.migflug.com/en/jet-fighter-flights/flying-with-a-jet/mig-15-fagot-in-czech-republic.html“ color=“#F22F2C“]Fly the MiG-15 yourself![/CSSBUTTON]

The latest development, the MiG-35 is a 4++ generation fighter jet, well known for the impressive performance at airshows, thanks to vector thrust. The Russian Air Force plans to operate the MiG-35 from 2014. 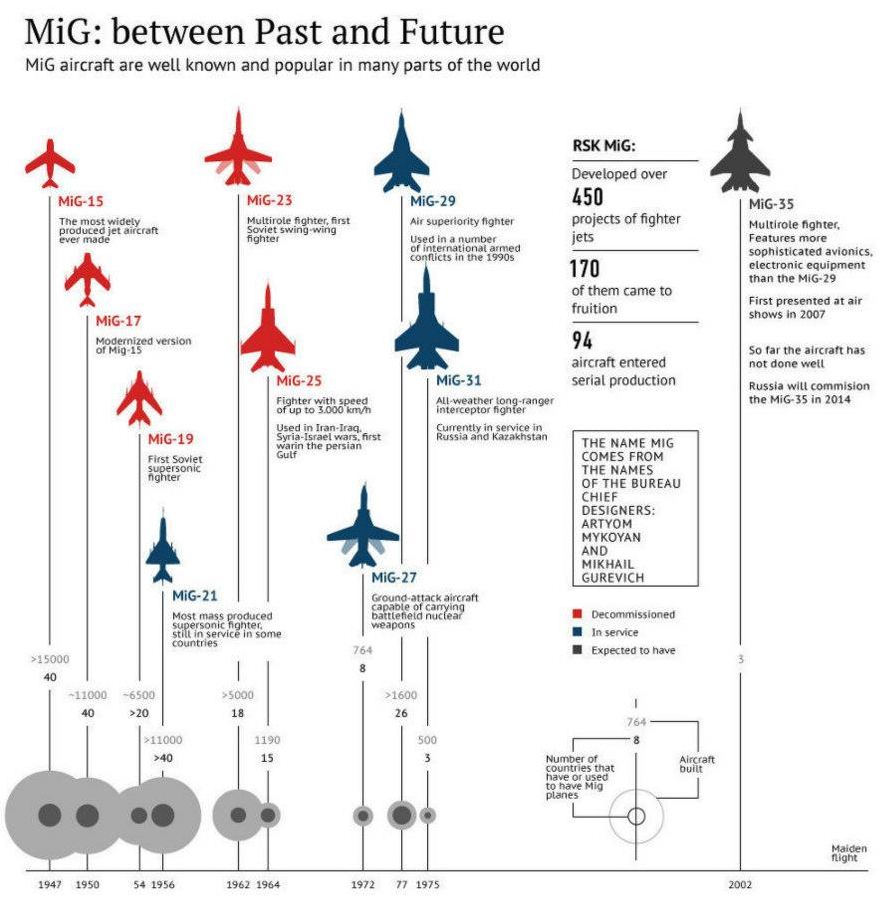 MiGFlug and the Mikoyan fighter jets

MiGFlug offered a lot of these famous Mikoyan fighter jets in the past.

Near Moscow, where the MAKS airshow takes place and the famous Gromov Flight Research Institute is located. Unfortunately Zhukovsky airbase closed for tourist fighter jet flights in 2006. Until 2006, we offered the following there:

Sokol Airbase is still operational today, unfortunately prices are rising constantly and the service could be better. At the beginning of the Sokol operations in 2006, the MiG-31 Foxhound was offered for MiG-31 Edge of Space flights. They stopped in 2009. Since then only the MiG-29 Fulcrum supersonic flight is offered, also for Edge of Space flights to 21-23 km altitude. [CSSBUTTON target=“http://www.migflug.com/en/jet-fighter-flights/flying-with-a-jet/mig-29-edge-of-space.html“ color=“#F22F2C“]Fly to the Edge of Space![/CSSBUTTON]

Since late 2012 we offered MiG-15 flights in East Poland. The MiG-15 has a never exceed speed of Mach-1, so it is a pretty powerful fighter jet. Even though it is smaller than the L-39 Albatros, it is 3 times as powerful as the Czech trainer and light ground attack aircraft. From 2015 – MiG-15 flights for tourists are offered in Czech Republic.

2/3 of the operational fighter jets offered

To summarize, of the 9 operational Mikoyan aircraft shown in the infographic above, MiGFlug has offered no less than 6 for civilian flights so far: The MiG-15, the MiG-21, the MiG-23, the MiG-25, the MiG-29 and the MiG-31. This is pretty remarkable as 5 of them are Mach-2 supersonic jets. Today the only supersonic jet available worldwide is the MiG-29 Fulcrum. We hope this is going to change.