The Aircraft Carrier – Part 2: The Exterior

The aircraft carrier is widely known to be a weapon of tremendous power but its shape and size look like nothing else and its features are surprisingly unknown to ordinary people. That is the reason why in this article we will look into the exterior of this devastating vessel. The aircraft carrier which will be focused on is the USS Nimitz, the world’s biggest carrier, weighing over 100,000 tons. Some of the questions that we will try to answer are:
– Why does an Aircraft Carrier look like it does?
– How is the aircraft launched from an Aircraft Carrier?
– How effective are an Aircraft Carrier’s weapons?

The design of the USS Nimitz’s hull 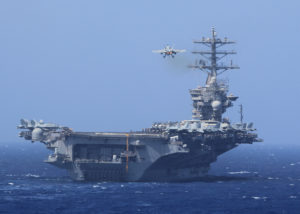 An F/A-18E Super Hornet prepares to land on the flight deck aboard the aircraft carrier USS Nimitz (CVN-68) on Oct 5, 2013. US Navy Photo

If we start with the looks of it those are derived from mainly three things: The size of the flight deck, the weight distribution of the boat and water resistance minimization. If we look at the USS Nimitz from above we see that a small part on one of the sides is made up by the “tower”, called the superstructure. It has been placed on one side of the ship to make room for the incoming aircraft and so improving the area of the landing strip. The fact that it has been placed on the edge makes the open surface even bigger because to balance the weight from the superstructure the flight deck on the other side is extended and so makes the deck even bigger. The reason for aircraft carriers not to be built like enormous squares is because the water resistance would be overwhelming and the engines would not be able to propel the carrier very fast with that design. That is why the vessel is so long and also why the hull is so pointed under the front part of the launch strip. It is simply to split the water in half and so minimizing the resistance that the water makes on the aircraft carrier’s movement.

The flight deck of a top modern carrier

The surface of the USS Nimitz has so many technological features that they can not all be written down here but I will mention the most important things of the deck. The catapults of an aircraft carrier are used to limit the takeoff length of a jet fighter from over a kilometre to a mere 100 meters. They work as such that the aircraft’s landing gear connects to a hook in the surface. When the pilot waves to the control tower that he is ready, hot pressurized steam is led into two pipes that end in the hook that the jet is connected to in the deck and shoots forward, assisting the airplane with its takeoff. But as technology advances so do aircraft carriers. In the new USS Gerald R Ford class, the steam catapults have been replaced with electromagnetic ones, called EMALS (electromagnetic aircraft launch system). The advantage of those is that they deliver more energy, need less maintenance and occupy less space under the surface of the deck. Another feature of the deck on the USS Nimitz is the coating of it. The coating on the surface is constructed so that it is anti-slip, preventing the aircraft to slide during heavy seas and landings, and also heat resistant which makes it possible for STOVL (Short Take Off Vertical Landing) jets such as the Lockheed Martin F-35 Lightning II to land vertically. If the carrier would not have this feature the F-35’s down-facing nozzle would melt the carrier’s surface. A small feature which really helps the crew of the carrier is all the white lines that indicate where airplanes can be launched, where airplanes can be put without being in the way of others, and where the steam catapults are hidden.

The well-defended air base – USS Nimitz

The weapons and sensors of the USS Nimitz is an artwork in itself. The ship has enough weapons to defend both the vessel as well as its crew from anything that the enemy might send to sink it. First of all if the enemy would send a missile to sink a modern carrier the carrier sees this with its advanced SLQ-32A electronic warfare suite and AEWACs long before impact. It then launches its interceptors, usually, F-18’s to take out the threat. If that against all odds would fail an aircraft carrier worth $4.5 billion is never on its own. It is constantly being guarded by destroyers that would shoot down the intruders as soon as they are within range. Lastly, the Nimitz has defenses on its own consisting of Nixie torpedo countermeasures, three 20 mm Phalanx turrets and sea-skimming missiles built to take out incoming anti-ship missiles. There are almost no offensive weapons on an aircraft carrier as its offensive strength lies in its aircraft. However the USS Nimitz has been fitted with two sea sparrow launch tubes, two RIM-116 Rolling Frame Missile launchers and the three previously mentioned 20 mm Phalanx turrets.

To conclude this part of the series it is needed to be said that carriers can have a huge impact. With some aircraft carriers’ capabilities of carrying over 90 aircraft to a war zone, its presence could mean the difference between winning or loosing. Its incredible firepower of both jets and missiles combined with top modern sensors makes it an effective weapon. Its catapults can launch one fighter every 20 seconds, so it can have an air fleet bigger than a small country’s up in the air in less than 30 minutes. This is what makes Nimitz class aircraft carriers and the lead ship of its class, the USS Nimitz,  one of the greatest and most devastating naval vessels ever built.