The art of Mid-Air selfies 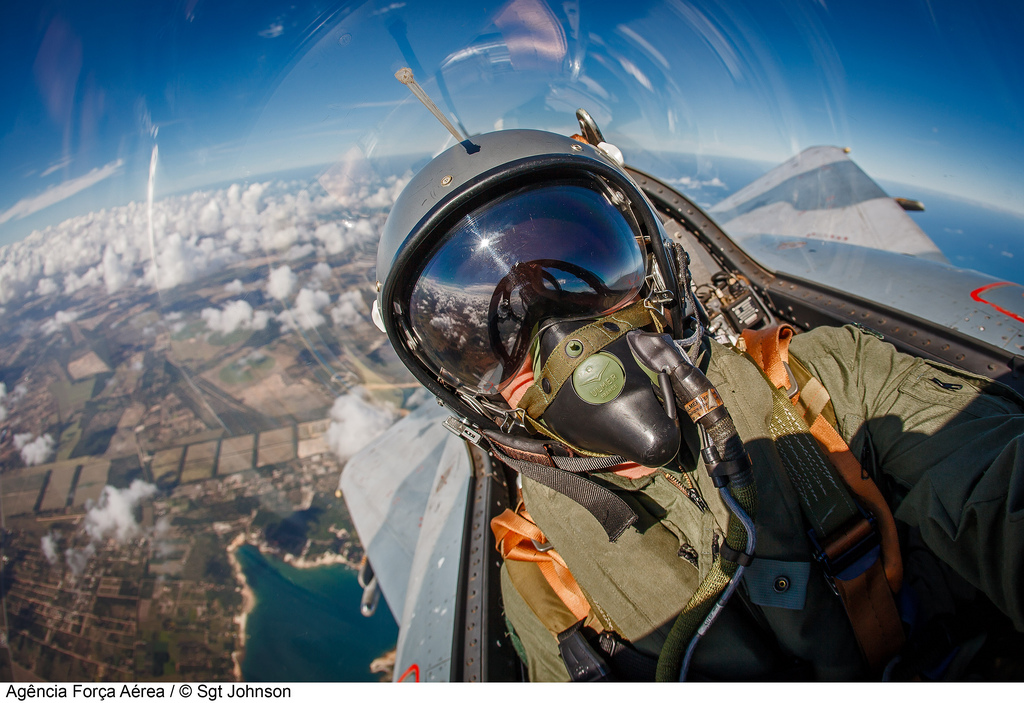 Since the beginning of the term ‘Selfie’ – A pilot decided to take his very own selfie, but not one you see every day on your Facebook wall. This guy decided to take a selfie in mid-air, which is absolutely jaw-dropping.

The RNLAF F-16 Demo Team 2014/5 currently consists of military personnel from both the 323 and the 322 Squadrons, based at Leeuwarden Airbase. The team consists of one display pilot, Captain Jeroen “Slick” Dickens, four display instructors, eight technical specialists and a webmaster. NATO Tiger Meet (NTM) is a two-week multi-national mid-size exercise that includes all types of air-to-air and air-to-ground and a wide variety of support missions. This year was held at Schleswig – Jagel, in northern Germany.

A fantastic shot of the Formation

The Military exercise, gathers squadrons sporting Tiger emblems with brand new, tiger colour schemes. Along with a few French Rafales, Polish F-16 Block 52+ jets, Turkish F-16s, and Czech JAS-39 Gripens in tiger liveries, the highlight of NTM was the first ever Tiger Typhoon, of the Bavarian Tigers. Founded on March 18th, 2013, by the 741/2 squadrons of the German Air Force’s Jagdgeschwader 74 in Neuburg, the Bavarian Tigers took over the Tiger Spirit from the 321 Squadron / Jagdbombergeschwader 32. The Tiger Typhoon pilot took a selfie during a large Tiger formation featuring all of the special colours that attended NTM14. 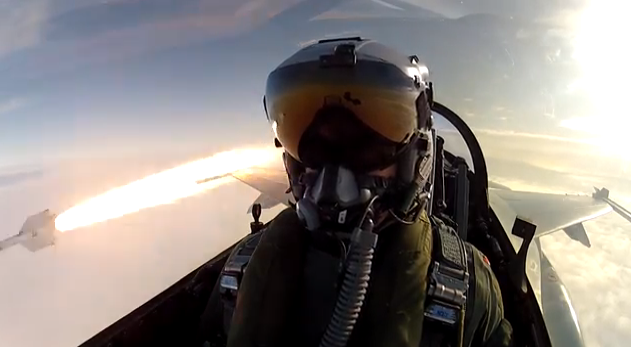 A still from the footage.

According to the Flyvevåbnet (The Royal Danish Air Force), on August 5 two RDAF F-16s from Skrydstrup deployed to Thule airbase in Greenland, to commence the first ever “Arctic mission” aimed at training F16 aircrews in the Arctic Search and Rescue mission. The aircraft arrived in Greenland for the 2 day exercise with a stopover at Kangerlussuaq another airport in Greenland. The Arctic scenario has recently become one of the Danish defence priorities. Among all the other things, the RDAF could be asked to quickly deploy fighter planes to the island to perform surveillance as well as SAR support tasks around the Arctic Circle.

The image (a still frame of the full GoPro video) was most probably shot during the deployment at Al Dhafra air base, in the UAE, of U.S. Air Force F-22 Raptors. According to the French fighter pilots, aerial combat with the Raptor is highly important, regardless of the outcome of the friendly dogfight, training with the F-22 gives the French Mirage 2000s the possibility of learning to fight against a superior fighter – “Sometimes a battle begins even before meeting the adversary, when it is necessary to convince themselves that the opponent is not so terrible, and despite the gap of performance, the technological chasm, one is able to get the game.”

Raptor formation from the canopy.

The best aircraft for selfies.

The Lockheed Martin F-16 is fully loaded with a large single piece bubble canopy which specially features no forward bow frame. The pilot sits on a newly developed elevated 30° inclined ejection seat (to improve G tolerance) that, combined with the special bubble canopy, provide what is by far considered the best 360° visibility of any combat plane in the world. The perfect plane for top notch, cool “selfies”. By the way, the much loved GoPro cameras have taken this kind of photographs to a completely new level.

But, it isn’t just F16s that are capable of taking unordinary images. Below is a self-portrait photo (selfie!) taken by a fighter pilot of the French Air Force’s Escadron de Chasse 1/7 Provence, which is based at Saint-Dizier. The fighter jocks depicted in the ‘selfie’ is flying a Rafale C “omnirole” aircraft at an unknown, but surely very high altitude, with condensation trail clearly visible behind the jet. Rafales of the Armée de l’Air have been involved in Libya and Mali air wars.

A further iterative development of the warbird has been recently announced, the new F3R standard will include the integration of MBDA’s Meteor BVR air-to-air missile, the latest version of the Sagem AASM Hammer air-to-surface guided munition and the newest version of the Thales’s PDL-NG laser designation pod.

Though, not only Western fighter jocks love self-portrait shots (known as ‘selfie’).

This image shows a pilot of the People’s Liberation Army Naval Air Force, also known as the PLANAF, aboard a J-15 Flying Shark. You can spot the aircraft carrier on the right hand side. The naval aviator took the photo as he was overflying the Chinese Navy’s flagship. The J-15 naval fighter aircraft is the primary plane of China’s recent Liaoning aircraft carrier.

And then, finally, there’s the handheld selfie, the most challenging (And dangerous). The one taken by Lt. Commander Nate Barton, who flies the left-wing position with the world famous U.S. Navy’s Blue Angels demo team is a real “selfie”: it is not a screenshot taken by a GoPro camera, like the other ones taken by other pilots recently, but a photo shot with a phone from the cockpit of an F/A-18 Hornet! Barton, Blue Angel Three, took the image and posted the following tweet on Twitter –

“#BlueAngels are ready to fire it up over @NavalAcademy #upsidedown!”. 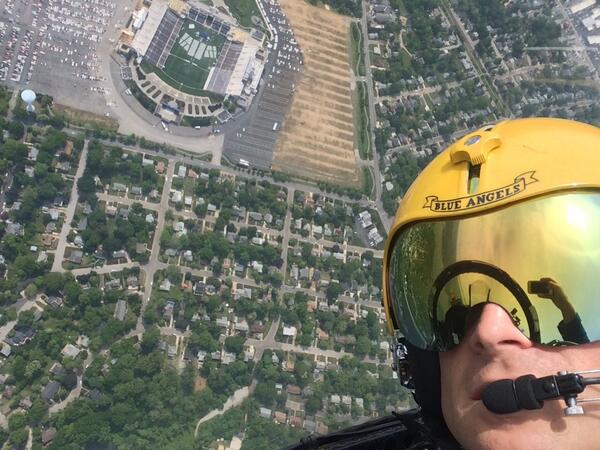 Did you know that you are being filmed during MiGFlug’s jet flights? Not exactly a selfie, but looking good! Have a look: