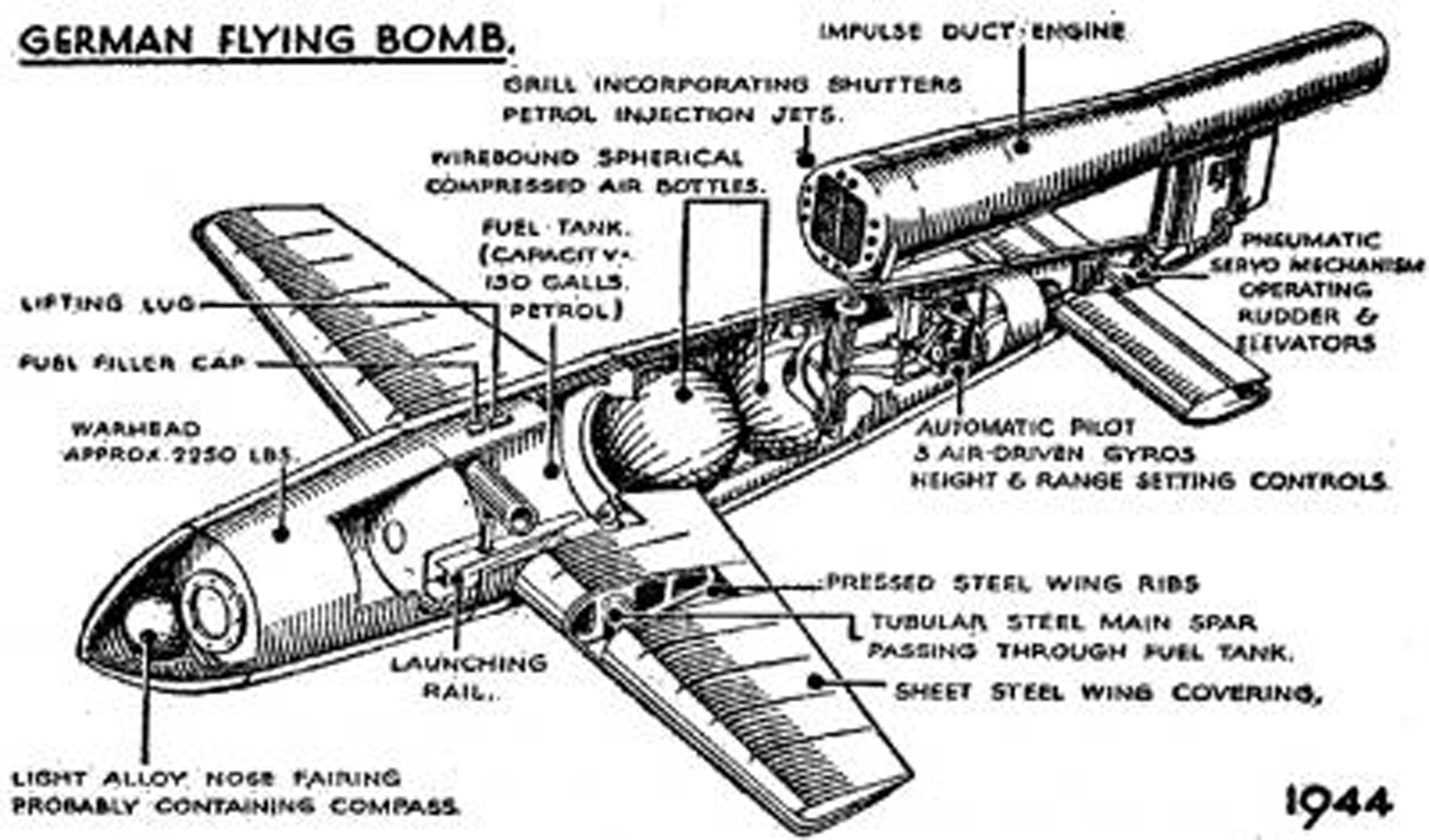 The V1 Flying bomb was the worlds first cruise missile. An unmanned gyro guided plane that delivered a tonne of high
explosive each time one hurtled into the ground. 2419 were to explode in London between June 1944 and March 1945, which is just 9 months. The distinctive noise of their pulse jet engine which cut out after a predetermined mileage terrorised London’s population. They quickly became known as Doodle bugs.

The V1  was capable of killing large numbers of people at one go, inflicting terrible injuries and causing huge material damage to
buildings and homes. The  V1 caused lots of chaos and blast damage over a wide area. It exploded on the surface, and a huge blast wave
rippled out from the epicentre. As it did so it left a huge vacuum, which caused a second rush of air as the vacuum was filled.
This caused a devastating pushing and pulling effect.

At the impact site houses or buildings were totally demolished and destroyed. In the inner London suburbs where terrace houses were
packed together, sometimes up to 20 houses would totally collapse, just at one hit.Brick walls were pulverised into small fragments.

Further out from the epicentre walls, roofs and window frames were ripped out exposing the contents and innards of the house. Further out still, all the windows were blown out and roofing slates blown off. Every time a Doodlebug landed hundreds of houses were damaged. Ranging from total demolition to  minor damage.  This was a freezing, drenched summer and repairs would take several months. Londoners were de-housed in their tens of thousands or shivered in cold, damp and roofless houses. The blast area of a V1  extended across a radius of 400 -600 yards in each direction.

Anyone unlucky enough to be close to the impact site would be blown apart or suffer crush injuries from falling masonry. Others would be trapped below collapsed buildings and have to be dug out. Further away from the impact site awful injuries were inflicted by shards of flying glass.

During the course of the attacks the nature of the injuries changed somewhat. At the beginning people were caught unawares on the street and  injuries from flying glass were widespread. Later on, people had understood the necessity of shelter in safe (er) areas of their home e.g. under the stairs. However, this had the effect of less flying glass injuries but more crush injuries from people being buried in the ruins of collapsed houses.

The toll of human suffering was appx. 6184 people killed by V1’s and 17981 seriously injured and maimed. Tens of thousands of others received lesser injuries. Countless more would suffer the pain of bereavement or from the loss of their home and treasured possessions.

The suffering and grief endured by Londoner’s during this period must never be forgotten.