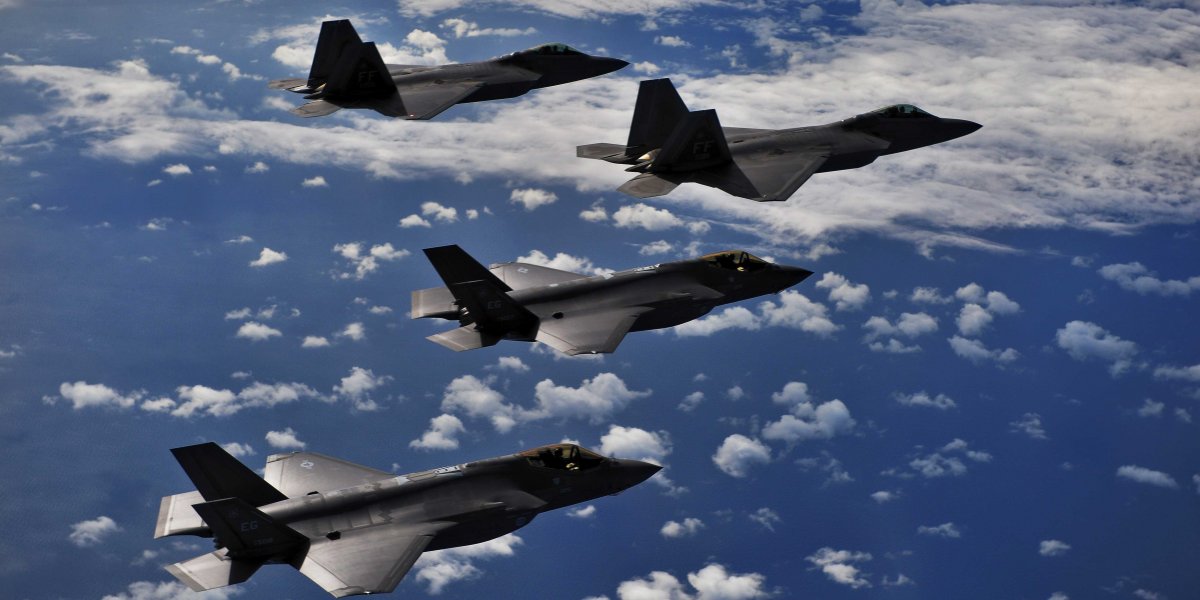 The joint training was targeted at improving integration between the two most advanced radar-evading planes in service with the U.S. Air Force. Flying mixed formations, the F-22s and the F-35s flew offensive counter air, defensive counter air and deep air support missions. This maximized the capabilities provided by operating two fifth-generation platforms together.

Fifth Gen capabilities had their combat debut with the Raptor in the air to ground role during the early stages of Operation Inherent Resolve, against ISIS targets in Iraq and Syria. The successful baptism of fire reaffirmed the pivotal role played by stealth technologies and sensor fusion capabilities, pulled together by 5th generation warplanes in current scenarios.

A mixed formation with the two mentioned aircraft.

Both fighters have had a rough turbulent development and the F-35 is still far from complete, but this was the vision. The F-35 and F-22 teamed up to combat against first world air

force like China or Russia. Air Force officials didn’t release many details from the training missions, but the images sort of speak for themselves. Even the largest cynics of the program have to stop and reconsider the history of the two controversial stealth fighters flying training missions together.

The F-22 is the only fighter worldwide with a capability of simultaneously conducting air-to-air and air-to-ground combat missions with near impunity. This is reached and accomplished with a never-before-seen, state of the art standard of survivability even in the face of sophisticated airborne and ground-based threats.

Before its selection as the winner of what was previously known as the Advanced Tactical Fighter (ATF) competition, the F-22 team conducted a lengthy 54 month long demonstration/validation program. The effort consisted of the design, construction and flight testing of two YF-22 prototype aircraft. Two prototype engines, the Pratt & Whitney YF119 and General Electric YF120, were also developed and tested thoroughly during the program. The demonstration/validation program was completed in December 1990.

A $9.55 billion contract for Engineering and Manufacturing Development of the F-22 was awarded to the industry of Boeing and Lockheed Martin in August 1991. Contract changes since then have elevated the overall contract value to a total estimate of around $11 billion. Under terms of the contract, the F-22 team would have completed the design of the aircraft, produced production tooling for the program, and would have built and tested nine flightworthy and two ground-test aircraft.

The F-22’s avionics and software system is one of the most advanced software integrated into an aircraft. It is the first aircraft to use integrated avionics, where the weapons management system, electronic warfare system and the AN/APG-77 radar work together as one, giving the pilot unprecedented situation awareness. The AN/APG-77 radar was designed for air superiority and strike operations and features a low observable, active aperture, electronically-scanned array including multi-target, all-weather capability.

The F-22 uses a newer and improved version of the ACES II (Advanced Concept Ejection Seat) ejection seat that is used widely in nearly every other Air Force jet combat aircraft (ex. F-16, F-117, F-15, A-10, B-1 and B-2). The seat has a centre mounted ejection control which is situated in between the pilot’s legs. The F-22 version of the McDonnell Douglas-built ACES II includes various improvements over the previous seat models. These improvements include:

The F-22 ACES II ejection system utilizes the standard analogue three mode seat sequencer that automatically detects the seat speed and altitude, and then selects the proper mode for optimum seat performance and safe recovery of the pilot.

Several operational problems have been experienced and some have caused costly fleet-wide groundings. Critically, pilots have experienced a decreased mental status, including losing consciousness, which is a big problem. There were a few reports of instances when pilots found to have a decreased level of alertness or memory loss after landing. F-22 pilots have gone through lingering respiratory problems and a chronic cough; other symptoms include irritability, emotional liability and neurological changes. A number of possible causes were investigated, including possible exposure to noxious chemical agents from the respiratory tubing, pressure suit malfunction, side effects from oxygen delivery at greater-than-atmospheric concentrations, and oxygen supply disruptions. Other problems include minor mechanical problems and navigational software failures. The fleet was grounded for a staggering four months in 2011 before resuming flight, but reports of oxygen issues persisted.