It had always been U.S. Marine Corps Capt. Katie Higgins‘ dream to become a pilot, and follow in her family’s steps.

This became reality in 2011, when she received her wings. But last weekend was probably the best day of her life, when she successfully became a Blue Angels pilot. If that doesn’t sound important to you – She also is the first female Blue Angels pilot!

In an interview with CBS News she told them “I saw the Blue Angels fly when I was a young kid,” – “I was definitely inspired by that.”

Although several other women have been on the Blue Angels team, none have ever been in the cockpit during a Blue Angels air show until Katie Higgins arrived. 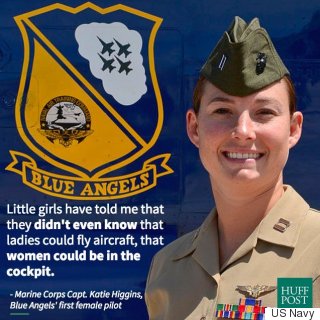 She discounted talk of her surprising inclusion in the Blue Angels as being a form of damage control after a former commander’s recent sexual harassment scandal.

“Well, honestly, I would just tell them to watch the show. They can’t tell the difference between mine and the other two pilots on here because I fly it just as well as they do,” the officer told CBS.

Capt. Higgins will be flying the Blue Angels’ C-130 aircraft, known globally as “Fat Albert.” It may not go as fast as the F-18s, but it’s every bit as integral to the show and the ride is surely as thrilling.

„I definitely didn’t come on the team to break any barriers or anything like that, that definitely wasn’t my agenda,“ Higgins said. „It just so happened that I was the first female to perform in a demo here, and if that is inspiring to people, if that’s inspiring to little girls around the country, then I’m doing my job.“