German Luftwaffe and the MiG-29 Fulcrum 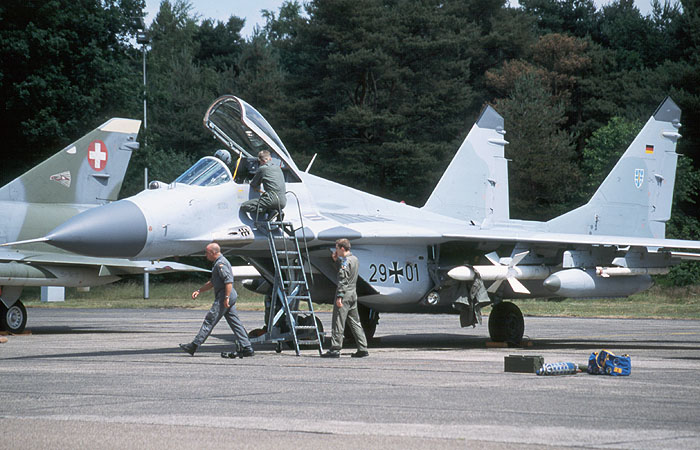 East Germany (DDR) bought 20 MiG-29A and 4 MiG-29UB two seaters just before the fall of the Berlin Wall, for the Luftstreitkräfte der NVA (East German Air Force). They entered service in 1988 and 1989. After the German reunification in October 1990, these MiGs were integrated into the Luftwaffe, made NATO-compatible and stationed on Laage Fliegerhorst, with Luftwaffe Jagdgeschwader JG73 “Steinhoff”.

Oberstleutnant Johannes Rudolf, German Tornado pilot and former L-39 Albatros pilot at MiGFlug, said about his experience in the MiG-29:

It soon turned out that claims of the MiG-29 being superior to Western fighter jets in some areas were right – for example, the Helmet Mounted Weapons Sight (HMS) – a technology the US Air Force and Navy didn’t have operational before 2003 – or the dogfight capability and manoeuvrability, especially at slow speed. The MiG-29 demonstrated it’s ability impressively during joint US-German dissimilar air combat training. But we’ll have a closer look at that below.

In 2003 22 MiG-29s were sold to the Polish Air Force for a symbolic 1 EUR per Fulcrum, 14 were taken into service with the 41. elt after an overhauled. Of the remaining two German MiGs, one had crashed after a pilot’s fault, and one (the 29+03) is on display at Laage-Rostock airport. 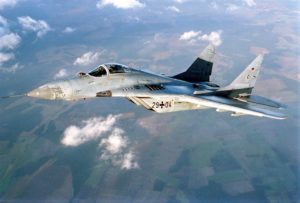 During service with German Luftwaffe, Germany and its allies the possibility to compare the MiG-29 like never before. Luftwaffe pilots who flew western jets before suddenly had the possibility to fly the state of the art multirole fighter aircraft of the Eastern Block. That said, one must be aware that Germany inherited the export version of the earliest model MiG-29A, which was inferior to the Soviet MiG-29A, e.g. they are lacking the Lazlo data link and the SRO IFF transponders. And today’s latest MiG-29s are of course more advanced if not to say other aircraft, after several upgrades. A funny side note here: The NATO findings were an important source of improvement for Mikoyan OKB, to further improve the MiG-29.

This led Johann Koeck, Oberstleutnant at German Luftwaffe, to the analysis:

Inside ten nautical miles I’m hard to defeat, and with the IRST, helmet sight and ‘Archer’ I can’t be beaten. Period.

The serious weaknesses of the German Luftwaffe MiG-29s led to limited missions within NATO.  According to Koeck, it was therefore only usable as wing (not lead), point defense and as aggressor for training missions.

How do these findings affect MiGFlug?

Of course, we are not serious here. We are not an Air Force and weapons, fuel capacity and as well as radio systems and radar is not important for us – and the flights in the MiG-29UB. All we want is the sheer power for the Edge of Space flights in the MiG-29. The MiG-29 has a thrust/weight ratio of 1.09, a max speed of more than 2400km/h (Mach 2.25, 1490 mph) and a climb rate of 330m/s! Remember: “It’s a rocket”. Other important things for our customers: The excellent view from the backseat, the beauty of the jet and – with limitations – the manoeuvrability. For most MiGFlug MiG-29 passengers it is more than they can handle anyway, but we had some crazy guys who wanted up to 9.2g.