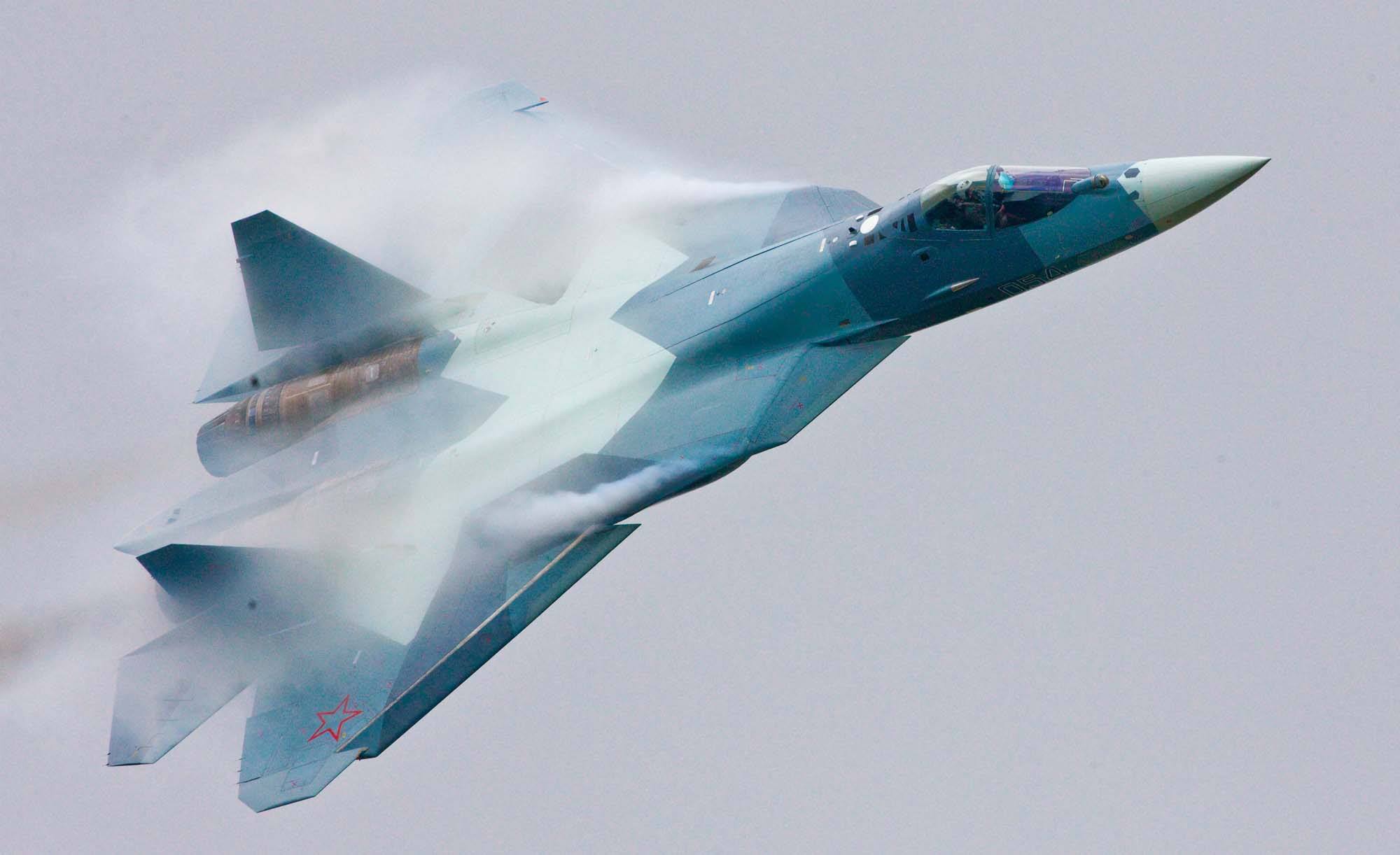 The Sukhoi T-50 PAK FA – PAK FA means Prospective Airborne Complex of Frontline Aviation – is a milestone in Russian aircraft production. From what we have seen of it it is believed to be a fifth-generation aircraft with stealth features, big internal weapon bays, and top modern avionics. It has not been introduced yet and therefore a lot is unknown about it and there are many opinions about it since it has not been in actual combat. However, using trusted sources we can get an overview of the fighter and by that try to understand what the world will see when Sukhoi introduces it in 2016.

What is the PAK FA?

First some backgrounds about the project. The Sukhoi PAK FA or the T-50 is a joint project between the Russians and Indians. It has been claimed that the Chinese were also invited, but that they refused, claiming they had a better idea of their own. The reason for the Russians to need partners was the fact that after the fall of the Soviet Union the Russian economy suffered a financial crisis in the late 90ies, following Gorbachov’s economic reforms (one of the reasons) in 1987 and 1988. They, therefore, needed partners and turned to their allies in the South. The Indians are, by a contract signed in 2001, supposed to pay 25% of the development cost of the fighter, and for this they do not only get PAK FAs, but also their own especially made HAL FGFA, which is an upgraded version of the T-50, featuring more than 43 improvements from the PAK FA, among others better avionics, better stealth, and the capability to mount Indian missiles and rockets on the hardpoints. The T-50 program is expected to cost about $20 billion and the unit cost is predicted to be ~$50 million. The Russians hope to keep the cost down for the PAK FA not only because they want to buy it for their own Air Force, but because it would be a very affordable fighter for export. 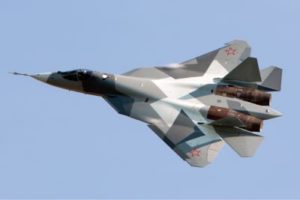 Starting with the exterior: There are lots of pictures of the T-50 available, (almost) all show the same thing. A twin-engine configuration with a small visual signature from the front as it is very thin. But with its 19.8m it is bigger than most modern fighters – as can be seen in the table:

It has swept-back dihedral wings with two horizontal and two vertical stabilizers. The engine intakes are also thin and are located close to the fuselage. The engines feature 3d thrust vectoring which means that it can alter its exhaust nozzles to direct the hot gases in any way it wants which makes it capable of turning faster. The Russians have gone with a tailed delta wing configuration just like with their MiGs, and not with the trapezoidal which the Americans has gone with. This is remarkable as many tend to say that Russian airplanes are copy-cats of the Western ones but judging from the shape of the generation fifth fighter jets that is certainly not the case. After we have a closer look, one can recognize that the shape of the PAK FA has been developed from the Sukhoi Flankers (as can be seen in the picture below). That the Russians have „borrowed“ some ideas from the US Advanced Tactical Fighter (ATF) program is however very likely since they use planform alignment on the PAK FA to get invisible to radar, which is one of the things that was developed in the ATF program. 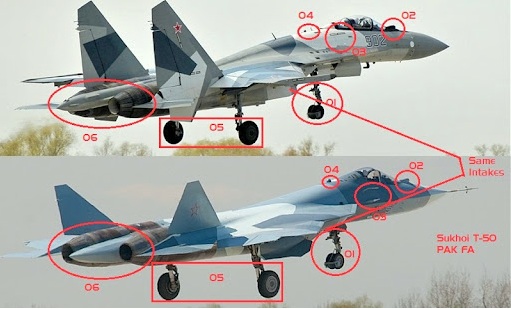 Similarities between the PAK FA and Su-35

How stealthy is the Russian stealth jet?

The exact radar cross-section of the PAK FA is not known as Sukhoi has chosen not to reveal it yet. But we can see that the Russians are extensively using the previously mentioned planform alignment which decreases the radar signature enormously. It is also built by using a lot of composite materials which absorbs the radar waves. Engine inlets are “melted” with the fuselage, and it features internal weapon bays. Two things that probably makes it less stealthy than its US counterpart is that it has round engine nozzles and a round IRST at the windshield. Sukhoi has claimed that the RCS of the PAK FA will be 1/40 of the Su-35S’s which would then be somewhere between -13 and -19 dBsM. Here are some quotes about the stealthiness of the PAK FA made by Air Power Australia:

The low observable design shaping employed in the PAK-FA prototype shows an excellent grasp of the design rules employed by American designers in the development of the F-22A and YF-23 Advanced Tactical Fighter…“ – Air Power Australia, 2010

Where the PAK-FA falls well short of the F-22A and YF-23 is the shaping design of the lower fuselage and side fuselage, where the general configuration, wing/fuselage join angles, and inlet/engine nacelle join angles“ – Air Power Australia, 2010 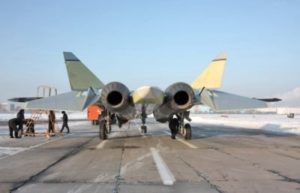 The 3d TV featuring nozzles of the PAK FA

The engines of the T-50 which have been claimed to be the „fifth-generation engines“ are one of the most interesting parts of the PAK FA according to many. The first of the T-50s produced will use the 117 engines, developed from the old AL-31 engines which are used on the Sukhoi Su-27. They are really powerful, and although the exact figures remain classified, it has been said by sources familiar with the topic that the thrust is increased by 24,500N over the AL-31s. This would result in a Thrust-to-weight ratio of a very high 1.19 for the PAK FA. The American counterpart, the F-22 Raptor has currently with its Pratt & Whitney F119-PW-100 engines a Thrust-to-weight ratio of 1.09. As if this was not enough, the later units of the PAK FA program will instead feature two Izdeliye 30 engines, which might give the fighter a thrust to weight ratio of 1.41 – a huge number. The top speed of the PAK FA is high, thanks to its NPO Saturn engines which allows it to supercruise at Mach 1.6 and to have a top speed of Mach 2.3. Supercruise is a feature that many gen 4.5 and gen 5 fighters possess. It means that they can fly at supersonic speeds without using afterburners. This reduces the use of fuel and so increases the range, reduces the heat signature (vs IR-guided missiles) and gives the aircraft a higher flexibility as it can fly faster for longer periods of time. The range of the PAK FA with 117 engines is supposedly over 3,500 kilometers at subsonic speeds. 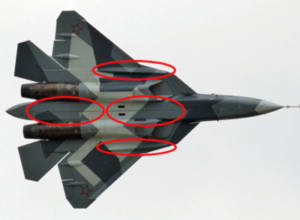 But you can’t take out your enemy using engines and aerodynamics – you need weapons. The PAK FA is currently capable to house a wide variety of weapons, both Air-to-Air,  Air-to-Ground, and it has a 30 mm gun.

As we can see they have about the same capacity of weapons, with the PAK FA having a slight advantage – weapon-wise – in stealth-mode (only internal weapon bays) while the Raptor has an advantage in missions that do not require stealth (external hardpoints can be fitted as well). The Russian fighter has a slightly larger variety of weapons. They both feature guns on the right side of their fuselage with the following guns mounted:

So the F-22 Raptor has both a higher muzzle velocity and a higher rate of fire. But the PAK FA still has very good features in both of these aspects. The higher caliber of the PAK FA’s GSh-301 will theoretically have a bigger impact in a fight than the 20 mm gun of the Raptor will. But with muzzle velocities of over 1000m/s the Raptor’s gun is extremely dangerous. So you better don’t have either one of them at your six.

The conclusion of this article is that the PAK FA seems like a very capable fighter once it enters service and production. However, at the current stage, we know the capability on paper and kind of what modules will be used. But how they cooperate together is unknown as we have not seen many tests of it. It features a strong engine, a big internal weapon bay, stealth and maneuverability similar to the (very capable) predecessor Flanker. And what might be its selling point is the price that is assumed to be much lower than Western counterparts. But we certainly don’t know enough to give an educated statement at this point – and there might be some surprises upcoming. But one thing is sure – even if it features some technologies that the F-22 and other stealth fighters have – it is certainly not a copy. Spying into each other’s activities is normal in the defense industry. But the Russian approach is strongly based on proven own developments.