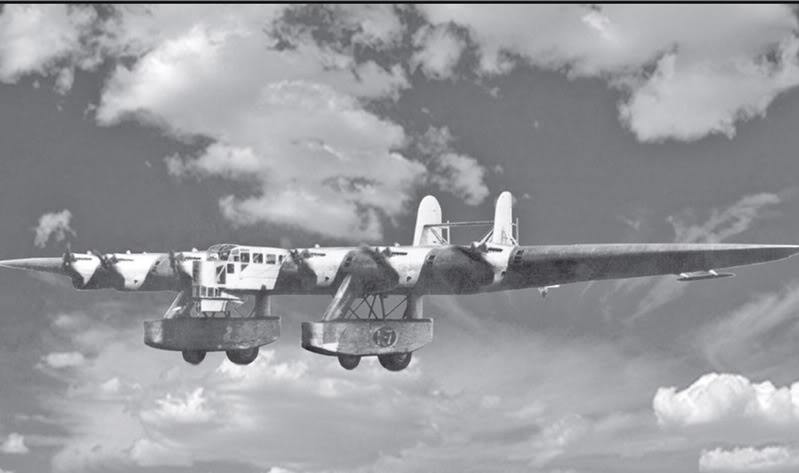 Even though speed, firepower and endurance have all been regarded as important factors of an aircraft, there is one feature that has always been regarded as cooler than most others – Size. Ever since we were small we have always wanted the largest possible of everything: large toys and large pieces of cake are to mention a few. And the Soviets liked size in particular. But as we are in this article discussing airplanes, the topic of the article will be an aircraft which were, at least at the time, one of the biggest and most devastating. This specific airplane is actually the largest one to have ever taken off using propeller engines. The aircraft that this article will be about is the Russian K-7, or as its real name is, the Kalinin K-7. It was built by the Soviet Union and had its first flight in 1933, only 30 years after the Wright brothers made their first flight. It was to be used as a heavy bomber or civilian transport, although in the bomber mode it featured guns as well and so made it a gunship/bomber. It had an unusual construction with large underwing pods that housed fixed landing gears. Inside of these pods was also some of the machine guns mounted.

Big even by today’s measures

It was designed by the Russian WW1 pilot Konstantin Kalinin who changed his profession to aircraft designer and led the aviation design bureau in Kharkov. He designed the K-7 with the huge wingspan of  53 meters and a wing area of 454 square meters which is greater even than that of the B-52 (370 square meters). It had seven engines, three on each side of the main wing and one at the rear. But the weight that was thought to be the maximum for the K-7 was exceeded and therefore two more engines had to be added, making it a total of eight engines on the main wing.

As was mentioned earlier it was possible for it to have different configurations depending on the mission. The two main mission types that this aircraft could be used for was troop/civilian transport and gunship/bomber. The configurations for each one are shown in the table:

(Of course, the configurations could be slightly altered but the above shown were the main plans.) 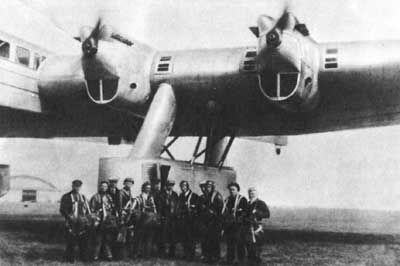 The crew of the Kalinin K-7 standing next to one of the landing gear pods.

Kalinin’s bomber – Astonishing at its time

But it was an aircraft of its own kind, with features outcompeting everything else. Keep in mind that at the time most other aircraft was much smaller. For instance, the very popular US heavy bomber Martin B-10 which had its first flight in 1932 (342 units built) had a wingspan of only 21.5m compared to the K-7’s 53m(!). For more numbers and figures of the Kalinin K-7 look in the table:

But even though it had been built very sturdy it showed a concerning instability during its maiden flight because of the construction of the airframe resonating with the engine frequency. This is a physical phenomenon meaning that the airframe starts to oscillate (a lot) because of the engine vibrating. Another example of this is the disaster of the Tacoma bridge (link below) where an entire bridge starts to resonance as a result of the wind having a certain frequency that matches the one of the bridge’s construction material. Because of the little knowledge about this phenomena at the time of the building of the Kalinin, they just shortened and strengthened the tail booms to solve the problem. But it did still suffer from a lot of vibrations (still caused by the vibrations from the enormous propellers) and on its eleventh flight one of the tail booms had a structural failure causing the elevator to be jammed and so the aircraft crashed. 14 men of the crew and one on the ground died during the accident.

Some quick facts about the Kalinin K-7:

It was one of the first aircraft with a twin-boom layout.

The K-7 was said to have had a pilot, 18 crew members and one passenger when it crashed, killing all but five of the crew.

As originally designed it was to have engines in the undercarriage sponsons. When completed, the bomber had gun positions, the bomb load and an internal staircase here instead.

Both a military and political role

The aircraft was not only big and had great firepower, but it also had an important role in politics as most of the chrome-molybdenum steel used was coming from inside the USSR. Because of this big step which meant that Russia had built the plane entirely (almost) by itself instead of importing most of the steel, created a lot of suspicion around the accident that led to the crash of the aircraft. But the investigation never got to a conclusion (at least it was not made public) and although two more prototypes were ordered they never got completed as the program was cancelled in 1935, only four years after the building of the original K-7 had started. There are not many photos to be found of the K-7 and many of them have been edited and/or enhanced using computers. But never the less we know that this creation is one of USSR’s most astonishing ever. To be able to transport 120 passengers in 1933 must have been an astonishing feature, just imagine that a lot of people lived to see the Wright brother’s first (comparatively poor) flight and then this, only 30 years later. What a time to be alive! Many ambitious and impetuous projects have been cancelled over the years, and the Kalinin K-7 will always be counted as one of them.