The largest Aircraft in the World – AN-225 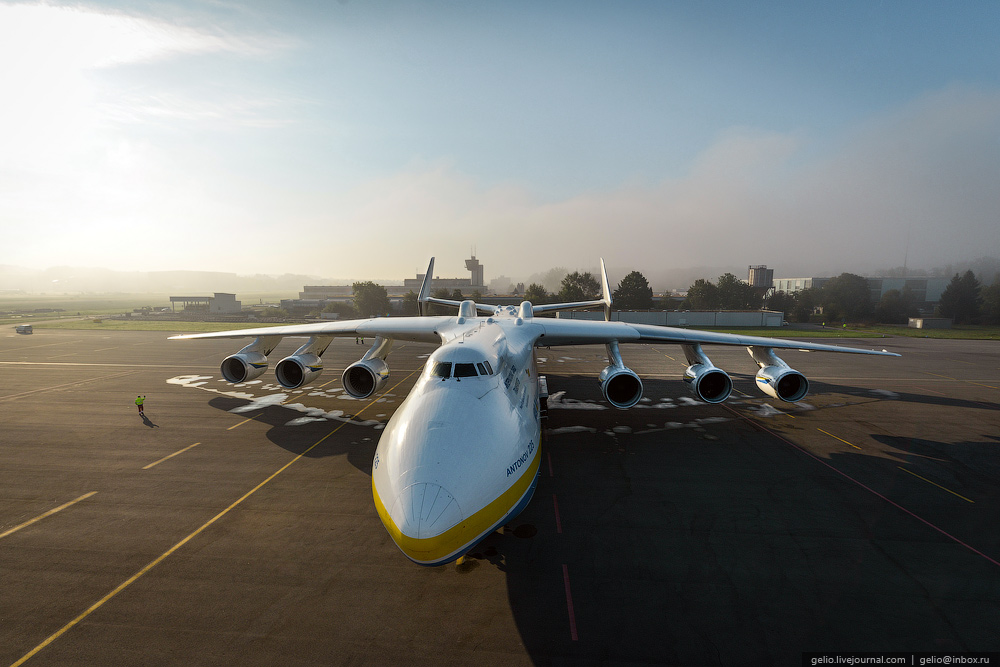 The world’s largest aircraft to date – The Antonov 225 Mriya; The Ukrainian word for ‘Dream’. This humongous aircraft was primarily built to carry the Soviet Space Shuttle (Buran). With six Ivchenko Progress D-18T turbofan engines, it can carry up to 1,410,000lbs.

The giant piece of Ukrainian metal is a one of a kind. The aircraft currently holds a registration of UR-82060, being the only finished aircraft of its kind; A total of two were ordered, but the only one finished. It takes around 10 minutes for the cargo loading ramp just to raise and store itself, let alone for it to load everything and secure them in position.
The aircraft has an extremely spacious cargo compartment with a length of 43.32 m, a width of 6.4 m and height of 4.4 m, that allows carrying a variety of cargo inside its fuselage. For instance:
• Sixteen standard aeronautical containers of UAC−10 type;
• 50 cars;
• Single piece of cargo (turbines, generators, dump trucks − Belaz, Kamatsu, Euclid, etc.). 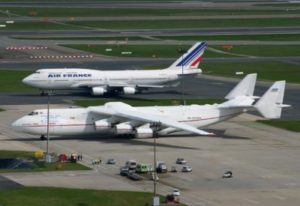 The Mriya has set approximately 240 world records including :
1. The transportation of the heaviest cargo – Recorded as having a mass of 253 tons.
2. The heaviest single piece of cargo with a mass of 186.7 tons.
3. As well as the longest cargo having a length of 42.1 m.

The Mriya also serves people reliably. The aircraft time after time, participated in humanitarian operations. For example, October 2009 – The AN-225 performed several flights on delivery generators to Samoa. They were necessary for the renewal of work of Satala electric station damaged by the tsunami. Only a spacious cabin of the AN-225 could accommodate ten 12-tons generators at once. Each of them was as large as a 6-meter container.
Around February 2010, the aircraft transported large machinery for redevelopment in Haiti, after the historic earthquake. Cargo with a weight of around 108 tons was delivered from Japan to the Dominican Republic by order of the government of Japan. They chose Mriya taking into account the necessity of urgent delivery. Only its spacious cabin could hold the amount of cargo needed. 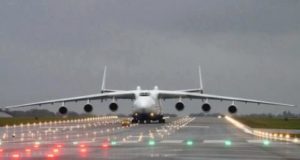 The Antonov was primarily designed to work as a Russian Shuttle carrier aircraft, specifically to assist the Buran space shuttle of the Soviet Space Program with transport. The plans were originally laid out by the Antonov Design Bureau in the early 80s, but the first flight did not happen until the 21st of December 1988.
The initial plane was to create 2 of these gigantic aircraft, but only one was built, and the other partially constructed. The collapse of the Soviet Union in 1991 saw the cancellation of the Buran Space Program and the linked contracts with Antonov. This is why the second aircraft was never completed in 1994, the single AN225’s future was in doubt. It was unfeasible to operate, the engines were dismantled and removed and it was placed in storage with the second un-completed AN225. Where they spent years together. In the 2000s, the international need for the transportation of strategic equipment which was significantly heavy, brought the aircraft back to business. Over the past few years the demand for the Mriya’s services grew significantly. In 2006 Antonov decided to finish the second aircraft. However, the demand would start to fade and once again, for the second time, the construction was put on hold, and up till this date, there have been no plans to continue the construction.

Sometimes one might wonder – Just how large is the aircraft?
Comparing the A380 to the Antonov 225 is like comparing a Spoon with a teaspoon. Below you can see a comparison of the AN225 with the A380 and B747. 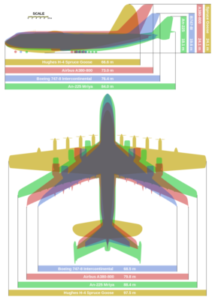 How substantial is the Mriya, one might ask:
• It requires SIX Ivchenko Progress D-18T turbofan engines to carry its payload in the air.
• The landing system has 32 wheels.
• The maximum gross weight is 640 tonnes (1,410,000 lbs.).

The Antonov An-225 is still in use today. Many nations – including the United States – still contract the aircraft when necessary due to its size. From chimney ducts to generators and wind turbine blades to war tanks, the Antonov has carried just about every large object that has required a transcontinental move. 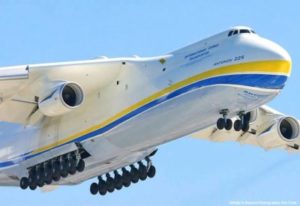 The AN225 is an enlarged version of the AN124 Ruslan – With only 55 of this aircraft created. The Mriya costs $300M, approximately, which is 3 times more than the Ruslan, which is also a strategic airlifter, but obviously smaller.

The only known operators are as follows:

The Aircraft has a NATO reporting name Cossack, which means a citizen of Ukraine and Southern Russia, noted for their horsemanship / military skill. The Aircraft has visited several countries including United Kingdom, Czech Republic, Canada, Germany, France, China, Switzerland, Brazil, Norway, and many more, as well as being refused from a few airports, some in the European Union. When the AN225 departs to an airport, a huge amount of aviation spotters and geeks wait at the fences and surroundings of the airport, eager for the arrival of this aircraft, possibly a one time wonder, and most of the time, in all types of weather, rain or shine, Snow or heat wave.