The 10 Fastest Aircraft in the World 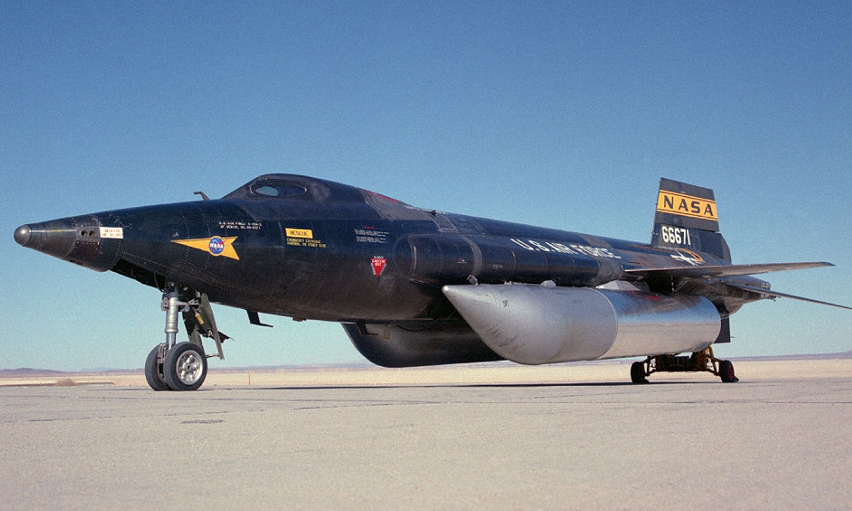 The Top Ten fastest planes in the World

Before we start – here is a nice video showing you the 10 fastest planes in the world:

There are very many aircraft that has exceeded the speed of Mach 2.0. Some of them are research aircraft, some are military and some are simply flying for reconnaissance purposes. But there is always something special with supersonic aircraft. Just imagine flying at an altitude of 5 kilometres, hearing a “go” from the radio and pushing that throttle backwards while feeling the 100+kN engine accelerating you to speeds higher than any other life form has ever been seen doing. But you are not the fast one, you are just the passenger. The aircraft that you are flying in, the machine that gives you powers to rise above the clouds in mere minutes is the true masterpiece. The masterpiece of military engineering. In this article, we will look into ten of the fastest military aircraft ever flown and see what they have in the trunk. Number 10: Sukhoi Su-27 Flanker. Its top speed of 2.35 Mach brings it to the very edge of USSR craftmanship with a twin engine and the first fly-by-wire control system on a Russian jet ever. It was built for air superiority to counter the new American 3.5 gen fighters such as the F-15 Eagle. It is armed with a 30 mm gun and 10 external pylons that can hold both Air-to-Air, heat-seeking, short and medium-range missiles. Due to all its accomplishments and popularity, it has very many different variants. Some of which are top-modern even today, 35 years after the first flight of the Flanker (1977). Some of them are:

And – the Sukhoi Su-27 Flanker was once available for passenger fun flights with MiGFlug! Read more here. Picture of an F-111 showing its variable sweep wing.

Number 9: General Dynamics F-111 Aardvark. Number nine on this list is not a fighter but a tactical bomber capable of flying at Mach 2.5. It had, before its retirement in 1998, 9 hardpoints and 2 weapon bays, together with being able to deliver a payload of 14,300 kg of bombs, a nuclear bomb, air-to-air missiles or a 2000 round machine gun could be fitted. However, due to the Aardvark’s role in air, it was rarely fitted with the gun. The Aardvark was the first aircraft in production with a variable sweep with the configuration which is why it was also tested for carrier-based operations, however, this was never completed (although there were some successful tries).

Number 8: McDonnell Douglas F-15 Eagle The F-15 has been claimed to be one of the most successful aircraft ever built and is still in service with the US Air Force. The Eagle’s twin-engine and thrust-to-weight ratio of almost 1:1 can propel the 18,000 kg aircraft to more than 2.5 times the speed of sound. It was introduced in 1976 and will continue to be a part of the air force beyond 2025. There has almost 1200 F-15s built and it has been exported to among others Japan, Saudi Arabia and Israel. The current plan is to keep producing them until 2019. It was first designed as an air-superiority aircraft but later the F-15E Strike Eagle was built, an Air-to-Ground derivative. The F-15 can load a variety of Sparrow, Sidewinder, 120-AMRAAM, drop bombs ( for instance Mark 84 or 82) or external fuel tanks on its 11 hardpoints. Together with its 20 mm M61A1 Vulcan gun, it is no surprise that this buster has over 100 confirmed aerial combat victories. By the way, a lot of visitors are interested in flying the F-15 – so we wrote a small article about that topic. Click the link for more information. Number 7: Mikoyan MiG-31 Foxbat With a top speed of Mach 2.83, the next aircraft on our list is the Mikoyan Gurevich-31 Foxhound (also this one was once available for tourist flights!). Due to its enormous twin-engine with a thrust of 2*152kN, it was able to fly at supersonic speeds at both high- and low altitudes. It is a Soviet Interceptor built to take out enemy aircraft and has great capabilities to do so using a combination of active and passive radars. Four Foxhounds can together control a front of 900 kilometres in length. The weapons that it has to its disposal are:

The production ended in 1994 but is unknown exactly how many MiG-31 that were built but between 400-500 is said to be a qualified guess. The MiG-31 is still today in service with the Russian and Kazakhstan Air Forces. The MiG-31 is a derivative of the MiG-25 which can be read about further down (place 4) and in the link at the very end of the article. Number 6: XB-70 Valkyrie. The XB-70 Valkyrie was a unique aircraft with six engines which together could accelerate the 240,000-kilogram aircraft to a velocity of Mach 3. This speed resulted in the frame of the aircraft being heated up to as much as 330°C in some areas. The extreme speed was needed for two reasons: 1: To accelerate away from Soviet interceptors and 2: To be able to escape the blast of the nuclear bombs that it was capable of dropping. The big size (weight) was needed to carry the fuel needed for the 6,900-kilometre flight into the Soviet Union and escape without refuelling and to house the 14 nuclear bombs that it was capable of carrying. The aircraft had its first flight in 1964 and is now retired, only two were built. X-2 Starbuster together with its crew

Number 5: Bell X-2 Starbuster. The Starbuster was an American research aircraft which had its first flight in 1955 and was retired in 1956. It was a continuation of the X-2 program and so Its area of investigation was to see how aircrafts behaved when flying at speeds higher than Mach 2.0. It did, as can be understood, not carry any weapons and featured a back-swept wing which made it have little air-resistance and was by that able to achieve the stunning speed of Mach 3.196 in 1956. However soon after this speed was attained the pilot, Milburn G. Apt, made a sharp turn and the aircraft tumbled out of control. He could not regain control of the aircraft and bailed out. Unfortunately, only the small parachute of the escape shuttle was opened and he hit the ground with too high speed. This fatal crash ended the Starbuster program. Number 4: Mikoyan MiG-25 Foxbat. This jet was a Soviet machine built to intercept American aircraft during the cold war like the SR-71 and high- slow flying surveillance aircraft. Since it was built to intercept the SR-71 it was required to have an extreme speed, hence its Mach 3.2 top capability. The Foxbat, unlike the Blackbird, featured 4 air-to-air missiles which made it an interceptor rather than a reconnaissance aircraft. It has never shot down a Blackbird but it has had many other combat missions which have been successful, for instance in the Iran-Iraq war. Over 1100 Foxbats were built between 1964 and 1984, however, today the use is limited, with its only users being Russia, Syria, Algeria and Turkmenistan. For more information about this astonishing bird see the link at the bottom of the article. The MiG-25 was also the fastest plane ever offered for fun flights by MiGFlug – it was mainly used for Edge of Space flights. Number 3: Lockheed YF-12. This jet was an American interceptor prototype with a top speed of Mach 3.35. It looked almost like the SR-71 Blackbird and featured three Air-to-Air missiles. The reason for it looking a lot like the SR-71 was because the SR-71 was based on the YF-12, and also because both of them had the same designer, the extremely famous Clarence “Kelly” Johnson. Only 3 YF-12’s were built but the program still made it into the history books with its  “highest speed”, “highest altitude” (both of these were later surpassed by the Blackbird) and “biggest interceptor” records. Number 2: Lockheed SR-71 Blackbird After its introduction in 1966 it has been used by both the USAF and NASA. 32 Blackbirds were built, all used for reconnaissance and experimental research. It featured stealth technology but if it was, against all odds, spotted by enemy forces, it could outrun the interceptors or surface-to-air missiles that were fired at it, due to its fantastic speed. The Blackbird was so fast that the air in front of it did not have time to escape, hence building up a huge pressure, and raised the temperature. The temperature of the aircraft, which could reach several hundred degrees high, expanded the metal, hence it had to be built by too small pieces. Because of this, the SR-71 actually leaked oil when standing still. The Blackbird holds the record for manned, air-breathing aircraft, see here. A nice documentary about the SR-71 for those who love this plane as much as we do: Number 1: North American X-15 This aircraft has the current world record for the fastest manned aircraft. Its maximum speed was Mach 6.70 (about 7,200 km/h) which it attained on the 3rd of October 1967 thanks to its pilot William J. “Pete” Knight. To be stable at these super high velocities, it had to feature a big wedge tail, however, the downside of this was at lower speeds the drag was extremely big from such a tail. Therefore a B-52 Stratofortress had to carry it up to an altitude of about 14,000 meters before dropping it at which it ignited its own engines. Just imagine sitting in a rocket measuring only 15 m in length and then being dropped, must have been a truly magnificent feeling! The X-15 was used at such extreme speeds so that it did not use traditional ways to steer (using drag over a fin) but instead it used rocket thrusters! This made it possible to reach altitudes higher than 100 kilometres, which was one of its world records. These are the three records that brought the X-15 rocket jet into the history books:

Fastest planes in the world – Overview

Here is an overview of the fastest planes in the World and their Top Speed (Click to enlarge). 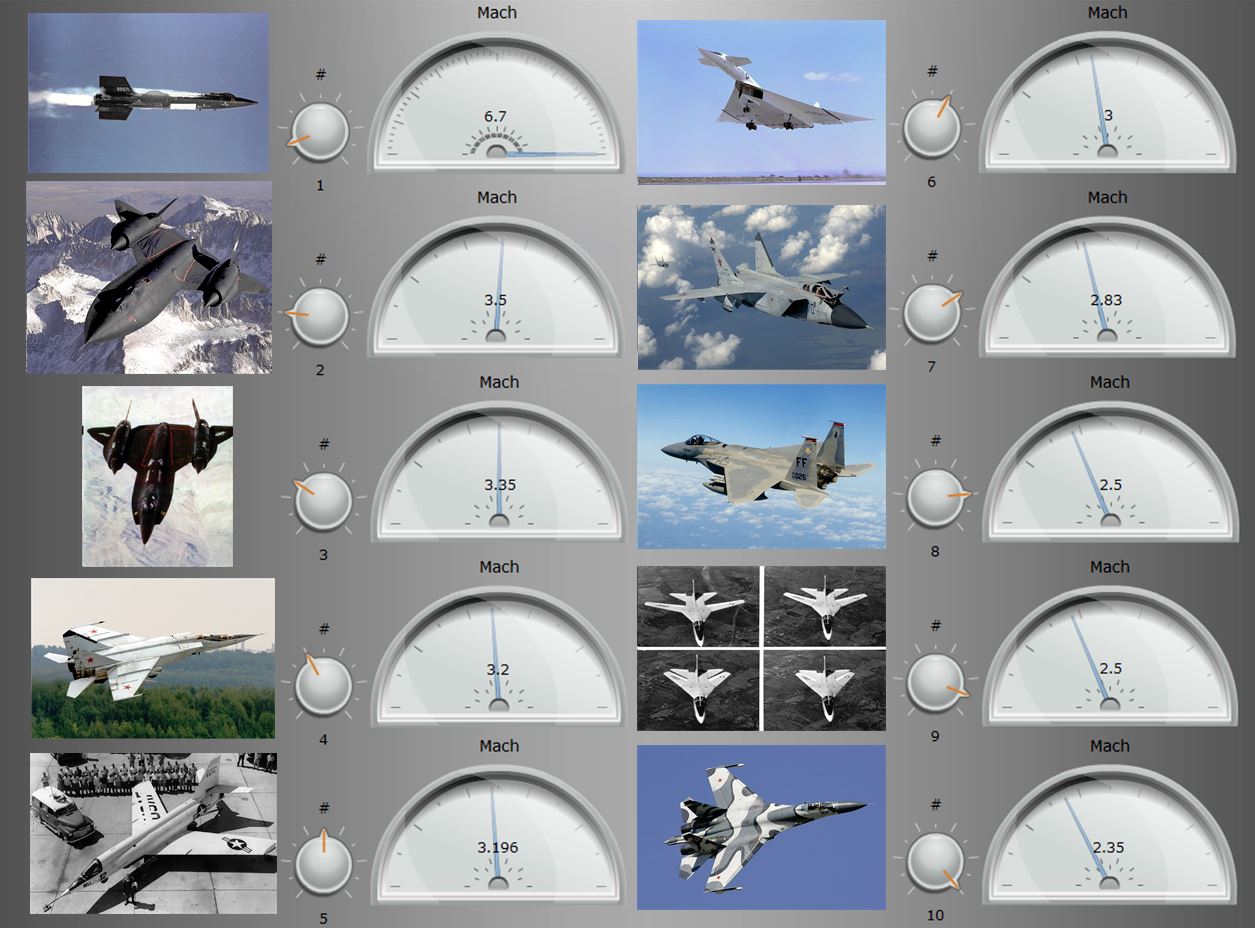 The fastest Aircraft in the World