The Aircraft Carrier – Part 3: The Interior 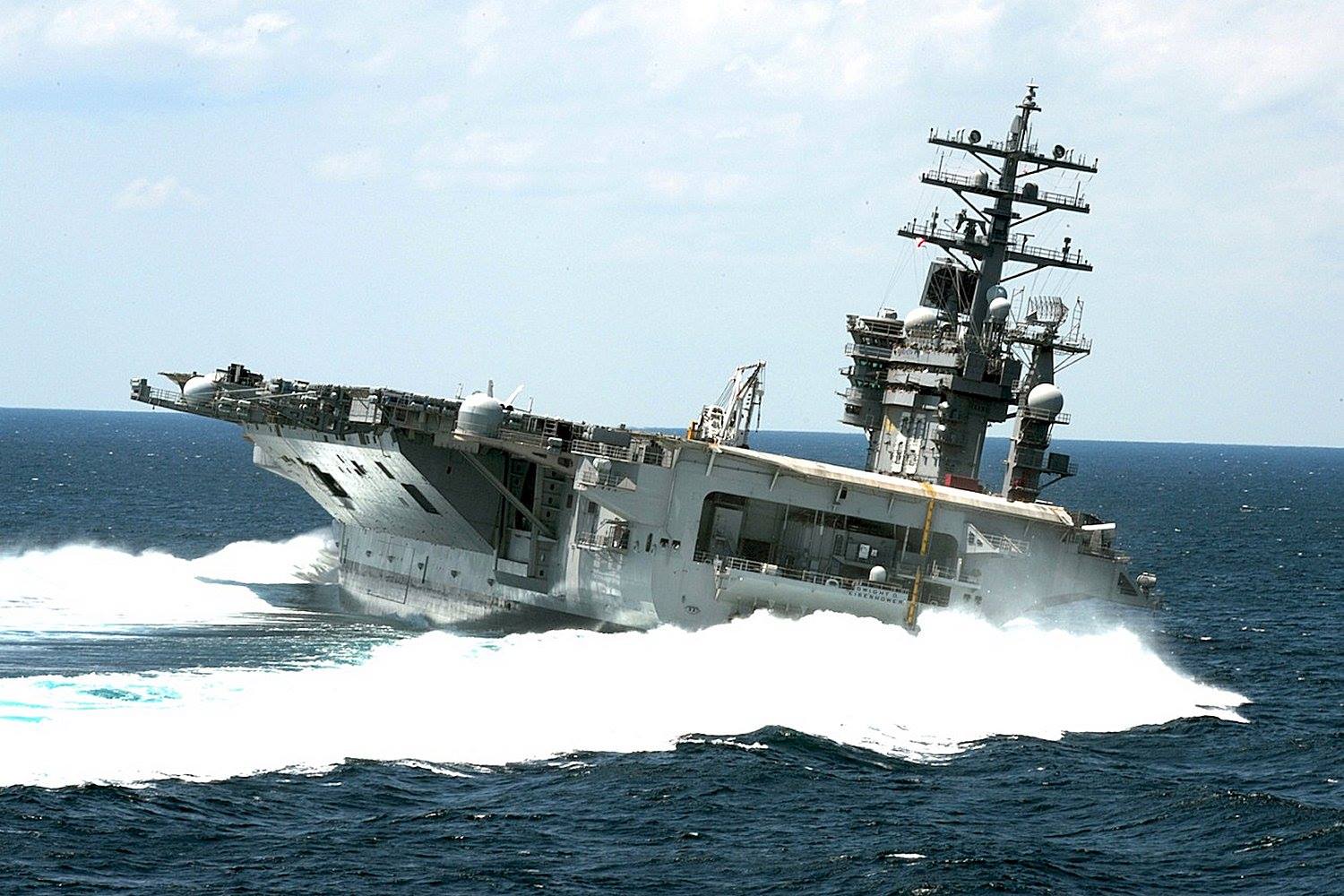 The Nimitz aircraft carrier. An enormous source of destruction, capable of delivering hundreds of tons of explosives to its enemy in under an hour, but it’s much more than that. Its 100 000 tons of steel, 18 floors under the deck and its impressive length of 332 meters is much more than just weapons. It is a floating city. In this part of the article series about aircraft carriers, the focus will be on its interior covering electronic systems, the crew, engines and hangar – everything that makes this impressive machine work and maintains its efficiency during its 50 years lifespan.

The crew’s part of the USS Nimitz 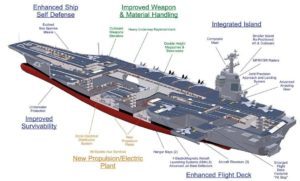 Diagram showing all parts of the Nimitz

The crew of a 100 000 ton ship is tremendous. Did you know that the crew consists of 3200 people – not counting the additional 2500 air wingmen (pilots, mechanics and other aircraft related jobs) – when the Nimitz class carriers are out at sea? The lodgement is located in the bow of the vessel, right under the main launch strip. Here the crew has access to their own bedroom which is usually shared with 5 others, kitchen, enormous dinner halls, doctors, a telephone bank to call their family, barber shops, chapels, an aviation jet engine workshop/maintenance facility, athletic facilities such as a gym and even a dentist’s office. But even though the ship has all of these installations it is also very tough for the crew. They are not allowed to hang around on the deck and since the size of the island (the superstructure) is so limited the members of the crew can’t spend their time their either. This means for some of the crew members that work deep within the carrier it can go weeks without them seeing any daylight.

Below the surface of an aircraft carrier 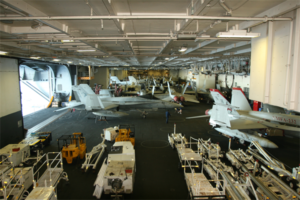 One of the three hangars of the USS Nimitz

Under the deck, many things are going on. There are the engine room and an elevator which transports the aircraft down below the deck into the enormous hangar. Under the deck are also almost all of the control rooms located. Since the “island” is made as small as possible the only workstations in the superstructure are the bridge, chart room, radar-and-surveillance systems and the flight deck control room. All the others of the total 6000 people on the vessel are working below the deck. For instance, the Catapult Piping Launch Room which’s task is to assist the aircraft with its launch is located right under the takeoff strip. The room which tunes and controls the catapults are located under the hangar in the centre of the vessel so that they are protected from potential incoming fire.

The energy source of CVNs 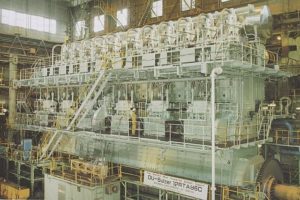 The engines and energy source of the USS Nimitz and other modern carriers are made up of nuclear reactors which heat water that drives turbines, propelling the vessel forward. When the turbines run on full power they are capable of making the 100 000 ton heavy aircraft carrier move at speeds as high as 58 km/h. The energy harvested from the A4W reactors is also used to drive the thousands of computers and other electronic equipment on board. Some of the electrical energy requiring systems with the highest consumption on board any modern-day carrier include: air search radars, target acquisition radar, air traffic control radars, landing aid radar and the NSSM guidance systems. But of course, the energy is also used for smaller but still vital systems such as pumping drinking water, lifting airplanes in the hangar, cleaning and circulating the air and refrigerators and ovens for the crew’s food.

In the stern of the boat, behind the hangar and above the rear phalanx turrets, the squadron ready rooms and the ship’s small boats are located. These boats are used by the crew too, for instance, get to the other vessels of the battle group (destroyers, submarines and cruisers supporting the carrier) and to get to shore to deliver mail that is then sent home to the US. All aircraft carriers of the US Navy are regarded as sovereign US territory even though they are on international water, that is why they all operate under their own ZIP-code.

The Nimitz aircraft carriers are the biggest ever built and they possess a tremendous firepower. But the destruction of which they are capable of is relying on the crew and the subsystems keeping this complex system working – a chain is never stronger than its weakest link. Over 100 years of innovation has to lead up the perfection achieved today – the 10 USS Nimitz class aircraft carriers are the undisputed heroes of the seas. With 18 floors under the deck, 332 meters long, 77 meters high, 90 aircraft, 100 000 tons of pure steel and a complement of over 3200 sailors and close to 6000 crew total, this is truly the world’s biggest vessel – ever built.

If you are also interested in the exterior and the history of the world’s biggest naval vessels, feel free to click on the links below to get redirected to the articles. Sail calmly, captains!

Also – see the Top Gun Aircraft Carrier in the way to its grave: